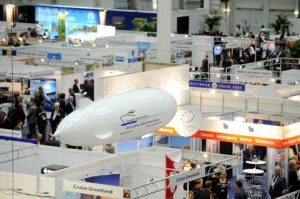 The Seatrade Europe Cruise & River Cruise Convention, which came to a close at the Hamburg Messe exhibition centre yesterday, concluded that growth prospects for the international cruise industry continue to be excellent.

This, despite the global order book for the construction of new cruise ships being currently smaller than in previous years. “A number of new orders can be expected in the coming months, “ agreed many cruise line leaders.

TUI Cruises made a start during the event, with chief executive Richard J. Vogel signing a contract with STX Finland for a 97, 000gt newbuild, with an option for a second ship, on the convention’s opening day. The first vessel is due for delivery in 2014, with an eventual second ship – subject to approval by the TUI board – pencilled in for 2015.

The industry’s optimism was very apparent at Seatrade Europe, which welcomed 250 exhibitors from 50 countries and over 4000 participants. Numerous new elements to the programme further strengthened this convention’s position as Europe’s leading event for the ocean and river cruise industries.

Seatrade’s Chairman, Chris Hayman, summed up: “Seatrade Europe 2011 has exceeded our expectations, with a 30% increase in visitors and more convention delegates in comparison to 2009. This demonstrates how important Europe is for the cruise industry and applies to the entire market from shipbuilders through to suppliers of top quality, environment-friendly technologies and destinations.”

Bernd Aufderheide, President of Hamburg Messe und Congress GmbH (HMC) underlined this: “Our exhibitors have told us that they were able to make first-rate contacts here. We have set a new course with the first Supplier Workshop and the Newcomers’ Area, which received a fantastic response from the market. Over 120 suppliers at the Supplier Workshop alone made use of speed dates to present their products to chief procurement officers of leading cruise shipyards Fincantieri, Meyer and Neptun Werft as well as STX France, reporting excellent discussions which have eased their entry into the cruise industry.”

This impression was mirrored by shipyard buyers at the workshop: “I am totally satisfied with the response of the participants to the new Supplier Workshop, ’ reported Ralf Sempf, Head of Materials Management / Procurement and member of the board at Meyer Werft in Papenburg. ‘This is the best way to do business since it has a very personal character.”

Bertrand Paquet, Chief Purchasing Officer at STX France commented:  “We were able to make very interesting contacts here for our shipyard. They included companies which were totally unknown to us beforehand.”

Exhibitors also gave positive feedback. “Hamburg Cruise Center was present for the first time, on a joint Destination Germany stand with other German ports, ” said Gerd Drossel, Managing Director of Hamburg Cruise Center e.V. “It was the right decision. Hamburg is the perfect location for the convention since North European ports are becoming more important in the international cruise industry.”

For Jens Henn, Head of Hospitality Solutions, Lufthansa Systems Network Services GmbH, new business contacts were the key success criteria at Seatrade Europe 2011. “For us, River Cruise Day in particular was a valuable new addition. It resulted in many new contacts. We will definitely be back in 2013.”

Tony Heuer, President of Fidelio Cruise Software GmbH, was “very pleased with the response. The visitor frequency was very high and we had just the right kind of visitor.”

Dirk Fuhrmann, Manager of H. Albert, a technical supplier from Bremen, Germany, was at the event for the first time as an exhibitor in the Newcomers’ Area. “You can make very good, high quality contacts here. Quality not quantity is the motto, “ he said. Another newcomer, John Hughes, Northern and Export Sales Manager of UK based Carpenter Limited, confirmed this impression:  “This is the most professional fair we’ve attended to date. In addition, the accompanying social programme was perfect. The evening event at Schmidt’s Tivoli was a fantastic opportunity to make contacts and network.”

Trade visitors and conference delegates were in unanimous agreement – that convention and exhibition make an ideal combination, providing opportunities for both in-depth industry discussion and for establishing new international contacts.

The visitor survey, carried out by an independent market research company, is correspondingly positive, with 88% of trade visitors rating the convention very positively. An important plus point for Seatrade Europe is that 79% of trade visitors have direct influence on procurement decisions. Three in four visitors were from overseas, with numerous visitors from the USA among them for the first time.

Another highlight of the convention was the presentation of the 5th Seatrade Insider Cruise Awards at Schmidts Tivoli theatre on Hamburg’s Reeperbahn. Winners included Michael Thamm, President of AIDA Cruises, who received the ‘North European Cruise Personality of the Year’ award.

The next Seatrade Europe Cruise & River Cruise Convention will be held from 24-26 September 2013 at the Hamburg Messe exhibition centre.