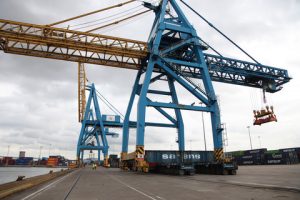 One of the three rail-mounted ship-to-shore gantry cranes, which weighs 650 tonnes, was moved to allow the terminal’s two biggest cranes to be positioned alongside each other.

Paul Mcgrath, PD Ports Hull General Manager, said: “We moved one of our two larger 35 tonne capacity quay cranes to allow them to operate alongside each other, rather than being separated by our smaller 29 tonne capacity crane.  By changing the set up, our two larger cranes will become our mainline cranes, while the smallest will become back-up.  This will help increase the speed at which we can process vessels and therefore maximise operational capacity to meet future growth.”

The two larger cranes have also been electrically refurbished, which involves switching the drives from a low-voltage system to a high-voltage system to improve efficiency, while the third crane will undergo a partial electrical refurbishment.  Mcgrath said its two major existing customers, Samskip and ESL/MacAndrews, are expecting growth and he also expects the terminal to attract new customers.

The cranes were moved by heavy lift expert Sarens. The crane was jacked up on a mobile heavy-lift trailer and moved back further into the quay side, allowing the other two cranes to be moved further along the quay wall.  Finally, the jacked-up crane was positioned back on the quay rails.