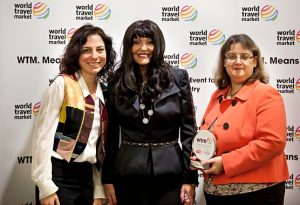 Pride of Travel Award winner Joanna Rigby has described carrying off the prize as one of the two best moments in her travel career.
The Thomas Cook home-based consultant was presented with the award, in association with TTG and the Travel Channel, today at World Travel Market, the leading global event for the travel industry.
Joanna, who is a cruise specialist, was presented with the award by Hilary Devey from BB2’s Dragons’ Den series.
She wins two tickets to destination in the world served by Qatar Airways.
Joanna won high praise from judges for going above and beyond the call of duty for her customers.
On receiving the award, Joanna said: “This means the world. It’s nice for all the hard work you put in to be recognised. My customers love it as well and are all waiting to hear.”
While judges were struck by the overall quality of the nominations this year they praised Joanna’s ‘exceptional commercial performance’.
“She demonstrates to all agents that if you put the effort in to providing good quality customer service you will achieve an exceptional level of sales – in this case nearly six times the normal level, ” said one.
Joanna has a sales and marketing background and began working in a Thomas Cook call-centre selling tailor-made holidays, 10 years ago. It was here that she picked up the cruise bug. She, then, moved to home-working five years ago and has never looked back.
She was nominated by her manager for exceeding customer expectations and for £2 million in cruise sales last year.
Alongside collecting a TTG award from actor John Barrowman, winning the Pride of Travel Award is a highlight of her career.
“It makes you feel that the long hours and hard work are worth it. I’m supposed to be part-time but I work seven days a week because I love it and this inspires me to keep going.”

How about joining the Panamanian Maritime Chamber?