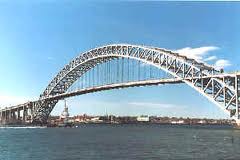 Crossing is the Gateway to Region’s Port Facilities, the Largest on the East Coast, and Generator of Hundreds of Thousands of Jobs and Billions in Economic Activity

Arching gracefully over the industrial Kill Van Kull waterway, the steel triangular-truss Bayonne Bridge celebrated its 80th birthday last Tuesday, an important milestone for the crossing that serves as the global shipping gateway for the region’s port facilities, which generate more than 270, 000 jobs and billions in wages and economic activity.

Construction of the Bayonne Bridge in the early 1920s posed unique challenges since the work had to be done without disrupting shipping traffic in the Kill Van Kull, the main channel in the port complex that today accounts for nearly $6 billion in regional economic activity.
Eighty years later, Port Authority engineers have also developed a unique solution to a maritime navigation problem posed by the bridge. That solution involves raising of the bridge’s roadbed from 151 to 215 feet to accommodate a new generation of larger ocean-going vessels. Planning work is underway, including a focus on building the project without disrupting traffic on the crossing or shipping traveling underneath it.
Port Authority Chairman David Samson said, “The Bayonne Bridge was built to serve as a tool of economic growth for our ports and it has served the region’s economy well. The $1 billion investment to raise the roadway of this iconic bridge is the next phase in our commitment – led by Governors Christie and Cuomo – to the international competitiveness of our ports that today handle 31 percent of cargo on this Coast of North America.”
Port Authority Executive Director Pat Foye said, “This bridge is an iconic landmark and a key link in our region’s transportation system and port competitiveness. Governors Cuomo and Christie are committed to this agency’s mission of driving economic growth, and under their leadership we are making the investments necessary to ensure the Bayonne Bridge serves as an engine of job creation as we move people and goods throughout the region for the next 80 years.”
Port Authority Deputy Executive Director Bill Baroni said, “The Bayonne Bridge has served as a gateway for our port for 80 years. We are working every day to make sure the Bayonne Bridge is raised to bring the largest ships in the world to our port and ensure we remain the busiest port on the east coast.”
Designed by famed 20th century architect Othmar Amman and built by the Port Authority of New York and New Jersey, the Bayonne Bridge was the world’s longest arch span at 1, 675 feet on dedication day, Nov. 14, 1931. An estimated crowd of at least 6, 000 showed up for the celebration and, a day later, the bridge officially opened to traffic with then-Bayonne Mayor Lucius Donohoe the first to drive across in his Rolls Royce.
More than 17, 000 motorists traversed the bridge on Nov. 15, 1931 and, today, some 3.5 million vehicles head eastbound annually across the span from the city of Bayonne to Staten Island.
One of the Bayonne Bridge’s most notable features is also one of its newest – the special lighting that adorns the span’s trusses. Since September 11, 2002, the bridge’s 34 lights have been lit red, white and blue. What began as a memorial for the one-year anniversary of 9/11 became a permanent fixture, at the suggestion of a young Staten Island resident.
Readers can visit the Port Authority website, www.panynj.gov, to find more facts about the Bayonne Bridge, as well as a collection of photographs and historical resources.