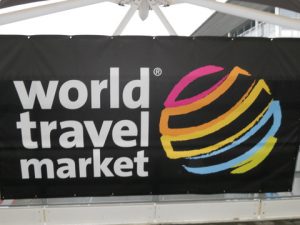 The World Travel Market 2011 exhibition was held once again at London’s ExCel Centre from 7 to 10 November 2011. Lilian Evgenidis was there to cover this premier event in the British capital.

Countries from all over the globe gathered in order to promote their tourism industry and services.
Each country tried its best to impress visitors, trade visitors, attract publicity and tourists by organizing events – from tastings to workshops and presentations, aiming to familiarize the public with the tradition and the possibilities offered in each case.
One of the main sponsors was the Greek National Tourist Board which funded the Press Area. Greece had a large stand in which one could find essential information about the major hotels across the country (Chandris Hotels), cruise companies (Louis cruises), different types of tourism (Sport’s tourism, Eco-tourism) as well as information about Greek islands such as Rhodes and Crete, which had their own stand. The Greek committee really made a great effort to reverse the bad climate by promoting the well-known hospitality and the high standards of the country’s tourism facilities. It was business as usual and Minister Panos Geroulanos said that the country will now start seeing the benefits of austerity measures being put into place, and Alex Konstantinou, head of media and PR for GNTO believes that the greeks will work hard as tourism amounts to 18% of the country’s GDP – obviously, time will tell! 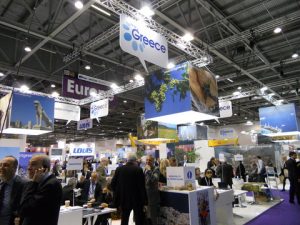 The ever busy Greek stand

WTM surpassed all expectations attendance-wise – from the first day there was a 14 centum higher number from last year. David Scowsill, WTTC President & CEO, speaking at the WTM said: “Travel & Tourism is one of the world’s great industries, providing 9% of global GDP and 260 million jobs; it drives economic growth, business relationships and social mobility. The industry is still growing strongly – but growth is lower than we had previously expected for both 2011 and 2012 due to the prevailing economic conditions and the disruption to travel patterns caused by natural disasters and social upheaval during 2011. That said, growth of 3.2% during 2011 would still be a laudable achievement and would rank the Travel & Tourism industry ahead of world GDP growth, expected to be 2.8%, and most developed countries”.
The Host Country
The 2012 London Olympics were high on the agenda during the first day of World Travel Market 2011, with the UK Olympics minister Jeremy Hunt officially opening the event. Being also the Culture Secretary, he also announced on the opening day that VisitBritain will benefit from a further £27 million of funding to help promote Britain in key overseas markets in a concerted effort to drive greater numbers of visitors to the country over the next four years.

Meanwhile WTM show up to 200 ministers and aides taking part in the Minister’s summit the second day of the event. A big plus and a hope things will work. Maritime Tourism had its day there and readers can see further informative news under The Cruise Industry.

Let us hope that Tourism slowly but steadily becomes the catalyst from getting us out  from the world’s worse ever recession!

Readers of www.allaboutshipping.co.uk can log on www.wtm.com and explore the event in its entirety.