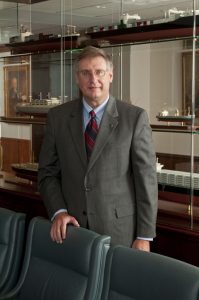 (Houston, TX—) ABS President and Chief Executive Officer Christopher J. Wiernicki has warned that a move into ship design by some class societies creates a fundamental conflict of interest with their role as independent providers of safety approval and certification.
Wiernicki used his keynote address at the Houston Mare Forum USA conference to question the rationale of some class societies in promoting energy-optimized designs created in-house, a development he described as ‘deeply troubling’.
Wiernicki said the issue went to the heart of the underlying principle for classification, yet he was surprised to have heard no other voices questioning the growing intrusion of class into an area of ethical quicksand.

“The bottom line is that, since the objectives of the designer and the class society are so fundamentally different, having class societies promote themselves as designers is dangerous, ” said Wiernicki. “It undermines the basic fabric of the industry, it destroys the credibility of class as an independent third party, it has the potential to lead to poor designs that could impact the credibility of the whole industry and it upsets the essential checks and balances between commercial pressures and effective safety and environmental risk management.”
Having trained and qualified as a naval architect, Wiernicki said he was acutely aware of the differences between the design and certification disciplines and the dangers of crossing the line between them.

“When classification societies begin developing and promoting their own designs, the essential independence of class is compromised. If ABS were to promote an in-house design for an energy-efficient tanker, how could we retain our integrity if we were then to approve that same design for construction?”
With the International Maritime Organization’s Energy Efficiency Design Index (EEDI) adopted for new vessel construction earlier this year, he acknowledged that the industry is moving into a period of innovative thinking with respect to basic ship design.

But this change should not have the unintended consequence of allowing class societies to become ship designers in an attempt to increase their market share. Classification’s independent reputation with underwriters, bankers, flag and port States would be fatally compromised if it designed the ships it also classes, he said.
“The EEDI will be the design scorecard of the future. Yet the current focus on energy-efficient designs and the prospect of tough market conditions is pushing class societies to move into the design space to either gain a commercial advantage or protect their existing position.”
Wiernicki said discussions internally at ABS as well as with clients and shipyards left him unable to reconcile the concept of class acting as a ship designer which then reviews and approves the same design. He went on to state that class societies need to choose between being class societies and designers – they cannot be both.
“I will go even further and say that they should not and cannot be allowed to, because wearing both these critical hats undermines the basic safety integrity of our entire industry. This is not a class issue; this is an industry issue, ” he concluded.

Founded in 1862, ABS is a leading international classification society devoted to promoting the security of life, property and the marine environment through the development and verification of standards for the design, construction and operational maintenance of marine-related facilities.