World’s largest heavylift vessel to be classed by DNV 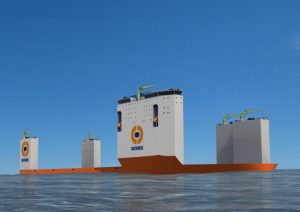 Rotterdam: Dockwise’s new heavy lift vessel, the Dockwise Vanguard, will be able to lift and transport units of up to 110, 000 tonnes. The maximum capacity of an existing vessel is 75, 000 tonnes.

With its width of nearly 80 metres and length of 275 metres, this is the first semisubmersible heavy lift vessel to be built in accordance with DNV’s new class rules for this type of ship. The vessel has no forecastle, which allows it to carry cargo of ”unlimited” length. Its deckhouse is mainly positioned outside its hull, allowing it to carry 70 metre wide cargo.

“As DNV is perceived to be the leading class society when it comes to heavy lift vessels, and as Dockwise is a front runner within this ship segment, the two organisations have cooperated to ensure this new innovative vessel meets all the safety standards, ” says DNV Regional Manager Central Europe Torgeir Sterri.
“Not only were DNV’s existing rules essential for scaling up this unique semisubmersible heavy lift vessel concept, but DNV’s risk assessment capabilities were also key to meeting all the SOLAS requirements for this unconventional design, ” he adds.

At the annual gala for the Dutch maritime cluster, the Royal Dutch Association of Shipowners chose the Dockwise Vanguard as the most innovative and daring project launched by the Dutch maritime sector during the past year. When accepting this award, Dockwise’s CEO André Goedée expressed his appreciation of the Dutch flag administration and DNV.
“I am pleased and impressed by the way the owner, flag and class have managed to work together. By thinking ‘outside the box’, we have been able to form a new concept and bring the whole industry a huge step forward, ” he said.

The vessel is going to be built by Hyundai Heavy Industries in Korea. Its keel will be laid in December and the vessel is due to be delivered in October 2012, when its first cargo will be ready to be transported from South-East Asia to Brazil.