Lloyd’s: At the heart of insurance 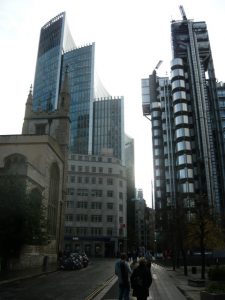 Lloyd’s and the London insurance markets are inextricably linked.

London as a world financial centre has expanded well beyond the Square Mile in the past 20 years. But insurers and brokers have resisted the lure of Canary Wharf – base of many of the world’s biggest banks – and the attractions of Mayfair – home of many of the most powerful hedge funds – to remain firmly situated within sight of Lloyd’s gleaming steel-and-glass building.

John Muir, a Senior Partner and Head of London Markets at Willis, says: “Lloyd’s has always operated from this vicinity: Edward Lloyd’s coffee house back in the 17th century was situated five minutes’ walk from the current building.”
Lloyd’s has always acted as a magnet for lawyers, accountants, loss adjusters and other professionals in what is the global centre of the insurance market.  Muir says: “It is this extraordinary concentration of expertise in London that makes it unique.”
Richard Ward, Lloyd’s CEO, agrees: “Many of the best brains in insurance operate in London, around 50, 000 of them. Together they represent the largest concentration of insurance knowledge anywhere in the world – a unique mix of underwriting and broking talent with more than 320 years of experience.”

Magnetic attraction
Lloyd’s exerts an enormous attraction on those in the insurance business. For many it is the industry’s spiritual centre. Ralph Van Helden, Lloyd’s Benelux Country Manager, is based in Rotterdam but comes to London at least once a month. “As soon as I step into the Room I feel at home, ” he says.
“The Lloyd’s Room, where people can come and trade, provides a centre for the London insurance market, ” Van Helden says. “As a result, what is a multi-billion-pound industry is transformed into a village industry, because everyone knows and sees each other every week. It’s what makes Lloyd’s and the London insurance market so unique.”
Muir says: “We have clients visit London from around the world who have never been insured by Lloyd’s but who want to visit it because of its historic and enduring significance to the world insurance industry.”
Ward adds: “Lloyd’s sits at the heart of this tiny space of EC3. Just as London is the financial centre for the world, so are we the insurance market for the entire globe. We cover risks in more territories than the UN has members.”

In the shadow of Lloyd’s
In 1986 when Lloyd’s moved into its new home at 1 Lime Street, the iconic “inside out” building stood out on the city’s skyline. Today, although a number of new skyscrapers are overshadowing its neo-Gothic steel towers Lloyd’s role as the heart of the London insurance market persists.
In 2008, Willis moved into a new 410-foot, 28-storey skyscraper directly opposite the Lloyd’s Building. Aon is set to become the principal tenant of the “Cheese Grater”, the 736-foot office tower due to open in 2014 a stone’s throw from Lloyd’s.
“The fact that both Willis and Aon have chosen to locate so close to the Lloyd’s building, to huddle up to Lloyd’s if you like, is a real vote of confidence, ” says Muir.
“It is great to be sited right at the world’s nerve centre for underwriting complex insurance risks, ” he adds.