A hypothesis on “Rena” 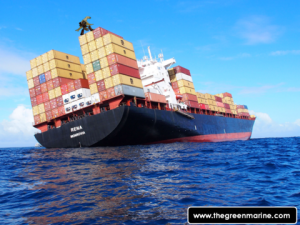 An interim report into the chain of events leading up to the Rena grounding 12-miles off the Port of Tauranga is shortly due to be published by New Zealand’s Transport Accident Investigation Commission (TAIC) [1].

Within days of the incident happening, two investigators from TAIC boarded
the strickened 3351-teu box ship to interview the three crew on duty at the time
of the accident, gather ship data and recover its voyage data recorder and navigation equipment for download and analysis.

The remit of the interim document is limited to setting out the facts of the accident discovered to date. For the final report, with analysis and recommendations intended to prevent recurrences, we will have to wait at least until summer 2012.

However, this hasn’t stopped some observers speculating on what caused the bow of the 21-year-old vessel to become wedged in Astrolabe Reef early in the morning of 5 October. An ex-seafarer (who writes under the pseudonym of ‘Antipodean Mariner’) seems to offer a reasonable hypothesis based on the facts currently available combined with his own experience [2]. He writes: ‘The fact that the Master and Second Officer have been charged over the grounding comes as no surprise. The midnight to 04:00 watch is the Second Officer’s customary watch, and the Captain is responsible for the ship, even when he is asleep.

‘The Second Officer would have taken over the watch at midnight from the Third Officer, confirmed the ship’s position and visually checked for any traffic around the ship. All ships have to have a passage plan which has the ship’s planned track and waypoints where the course will be changed. The passage plan is prepared by the Second Office and signed by the Captain.

‘At midnight, Rena was tracking across the Bay of Plenty, north of White Island on a westerly course. After passing White Island, the Rena altered course to port to 263 degrees, which would have seen her passing clear of Astrolabe Reef by about two nautical miles and entering the area where the Port of Tauranga Pilot would board the ship. However, from about 01:20 in the morning, something happened which caused the Second Officer initiated a series a series
of small course alterations to port which placed her on a more direct heading to meet the Pilot but also passed over Astrolabe Reef.

‘Astrolabe Reef is a well charted obstacle but unmarked by any beacons and it’s unlikely that the reef‘s break would appear on the radar display. Rena is a relatively old ship and it is also unlikely that she would be fitted with an ECDIS. It’s likely that the Second Officer would have had to consolidate the information available to him from the radar, compass bearings and GPS onto a
paper chart.

‘The Antipodean Mariner speculates that cumulative effects of deviating from the passage plan, the failure to identify Astrolabe Reef as a navigation hazard, the series of small course alterations to port, potential time lag to transfer the position to the paper chart, relatively large area of apparently open water to port of the ship and preparations to arrive at the Port of Tauranga appear to have overwhelmed the Second Officer to the point that he lost ‘situational awareness’. The Antipodean Mariner is pretty sure that the person most surprised by the sudden deceleration of the Rena was the Second Officer closely followed by the Captain.

Notably, Antipodean Mariner drew upon public-domain AIS data on the ship’s track to formulate his hypothese. Interested readers can see the position, course and speed of the vessel up to the instant of grounding on Marinetraffic.com [3].

U.S Wakes up to Cyber Crime Threat; Rest of the World Sleeps In