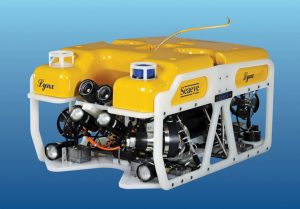 It is the first purchase of Saab Seaeye vehicles by Belov, founded in 1981 and a key provider of services across civil, harbour and offshore operations.
General Manager, André Weber Cameiro says they changed to Saab Seaeye, “because Saab Seaeye has a reputation for reliability and fewer maintenance problems”.

He explains why he chose the Lynx ROV in particular:
“It has the power to handle a wide range of work-class tooling, not usually possible in an ROV of its size, yet still has enough power left to go where you want, and do what is needed, “ he says.
The Lynx – and deep-rated Falcon ROV, also ordered – will work from fixed rigs in and around jackets and semi-submersibles, where operationally quick and easy system re-location is important.

“The ROV system will be in a state of constant mobilisation as it will be moved from one side of a rig to another, “ says André Weber Cameiro, who sees the Lynx system, with its tether management cage, as being particularly easy to move around.
The same mobility can be said of the compact Falcon ROV, which is specifically designed to be easily manhandled for fast deployment from a rig, a vessel, or even from a RIB.
The 1500 metre rated Lynx ordered by Belov, with its six powerful thrusters and four simultaneous video channels, is fitted with a range of hi-spec equipment.
This includes a Konsberg high definition colour camera, a Kongsberg mono Low light camera and two Konsberg compact colour zoom cameras; a Tritech Super SeaKing Sonar, along with a CDL fibre-optic gyro.
A detachable tooling skid is also supplied together with a Gauntlet Plus, four-function manipulator and a CP contact probe.
The tether management system, from which the ROV is launched, has 1200 metre of armoured umbilical cable and 250 metres of ROV tether cable. The TMS also comes with its own mini wide-angle B&W camera.
The 1000 metre rated Falcon is also fitted with a Kongsberg camera, five-function manipulator, rope cutter and CP probe.
With over 200 billion barrels of reserves estimated in Brazil’s oil fields, the demand for powerful and intelligent ROVs that can work reliably in deep water operations will grow as the huge fields are developed.