More than 900 guests saw some of Greece’s leading shipping personalities, companies and service organizations honored in a glittering gala dinner at the Athenaeum InterContinental Hotel to announce the winners of the Lloyd’s List Greek Shipping Awards for 2011. Allaboutshipping was represented by Helena Kritikou.

The packed audience for the 8th annual Greek Shipping Awards, held under the auspices of Lloyd’s List, the international maritime newspaper established in 1734, included amongst others the Deputy Minister for Development, Competitiveness and Shipping, Adonis Georgiadis, the European Commissioner for Maritime Affairs and Fisheries, Maria Damanaki and the President of the Hellenic Chamber of Shipping George Gratsos.

The event was exceptional, well organized and glamorous with hundreds of key personalities in attendance. The awards are held annually to recognize and reward achievement and meritorious activity in the Greek shipping industry as well as to promote Greece’s status as a maritime center. Winners are chosen by an independent panel of judges representing a broad cross-section of the Greek shipping industry. The 2011 awards were sponsored by ClassNK as overall event sponsor, heading a line-up of prestigious companies sponsoring the event, with its chairman Norobu Ueda addressing the Greek Shipping community audience in Greek! Nigel Lowry, of Lloyd’s List, took to the stage once again as Master of Ceremonies and delivered this years’ annual presentation dinner. At 8.00 p.m all guests gathered in the large ballroom of the Athenaeum Intercontinental Hotel, where an unexpected surprise took place:  Nigel, apart from being a great host, unraveled his musical talent by performing a very imaginative song with smart lyrics adapted to the purpose of the event. Worth mentioning the live interview of guests by Philip Pangalos and Maria Saliari – that made the night even more memorable!

The Winners
Spyros M. Polemis, the chairman of the International Chamber of Shipping, representing more than 70% of the world fleet, was named Greek Shipping Personality of the Year for 2011, in recognition of his tireless commitment to the industry and his emergence as a strong voice against piracy. 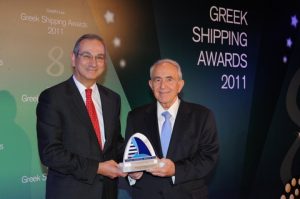 Lambros Varnavides, managing director and global head of shipping for sponsor The Royal Bank of Scotland presenting the Greek Shipping Personality of the Year Award to Spyros Polemis.

Lloyd’s List’s Greek Shipping Newsmaker of the Year award went to George Economou, chief executive of Nasdaq listed DryShips, for an extraordinary year of deals for DryShips, a private entry into the LNG shipping sector, and his key role in resisting Cosco pressure to reduce agreed charter hire to a large number of shipowners. The ‘Newsmaker’ category was decided by editorial staff of Lloyd’s List.
Shipping and oil pioneer Kyriakos Mamidakis was awarded the Lloyd’s List / Propeller Club Lifetime Achievement Award for an outstanding career which began in the 1950s.

Emanuele Grimaldi was elected International Personality of the Year, the only award open exclusively to non-Greeks. Grimaldi was voted for his involvement in short-sea and ro-ro services as well as encouraging more sustainable transport solutions. Among his group’s shipping companies, the Grimaldi Naples group controls Crete-based Minoan Lines.

The Seafarer of the Year Award was won by Capt Stylianos Peristerakis of the Anek Lines ferry Artemis. The master was awarded the prize for participating in two rescues at sea in a single week last August as well as serving on an uneconomical route (‘agonigrammi’) serving smaller and remote islands with about 70 port calls a week.

Atlantic Bulk Carriers’ supramax bulker “Desert Calm”, delivered earlier this year as the lead ship in a series of eight highly-rated sister bulkers from Hyundai Mipo Dockyard, deservedly emerged as the ‘Ship of the Year’ for its enhanced safety and environmental specifications as well as crew features. 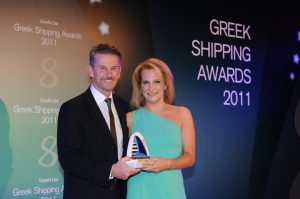 Award for Achievement in Environmental Protection – Helmepa.
Ship of the Year – “Desert Calm”
Seafarer of the Year – Capt. Stylianos Peristerakis

Award for Achievement in Education or Training – Prof. Andreas Merikas 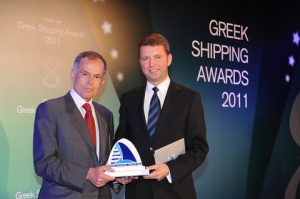 It goes without saying that it is about time for a Greek Prime Minister to attend such an event; then his view on shipping  as well as that of his government will totally change. Leaders of the Unions too should be there, so as to understand the meaning of Greek Shipping as the spearhead for furthering Greece’s Economy in its entirety, particularly in times such as the current one!
Allaboutshipping thank Shelagh Ingledow for her support in creating this report and facilitating our correspondent.

Nice work there John, best wishes to you and Allaboutshipping.