December 9, 2011
The Saint of the Seven Seas and Patron of Sailors had its day! Nearly 400 faithful participated last Wednesday in the traditional liturgy at St. Nicholas Cathedral in Shepherds Bush. Amongst them, leading the Diplomatic and Military Corps, the Ambassador-Counsellor of Greece Nicholas Argyros, the General Counsellor of the Cyprus High Commission George Georgiou, the Defence Attaché Captain (HN) Anastassios Tserkezoglou, and the Maritime Attaché Captain (HCG) George Seferiades, as well as officers from both the Defence and Maritime Attaches compounds. Archbishop Gregorios of Thyatira and Great Britain officiated, ordinated a cleric naming him Pavlos as a priest and afterwards a reception/dinner took place at the adjacent hall where two very touching speeches where delivered by the Archbishop and the Defence Attaché of Greece.  Interesting words with simple and pragmatic meanings worth analysing them, given not only the global economic chaos, but also the tradition and mentorship of the seafaring profession. 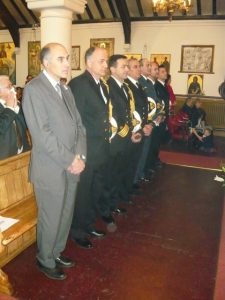 Worth also remembering the miracle of Wheat Multiplication during the famine at Myra the Saint’s birthplace in the south west coast of Anatolia (today Demre) and many other legends. The Saint is known as Sinterklass in the Netherlands and Belgium and on the eve people exchange gifts! All over the five continents major events take place in his memory, and suggest all readers to try find and read about the importance of the Saint, his lifestyle and attitude in a world where we lack tradition, discipline and transparency!
0 comment
0
FacebookTwitterLinkedinEmail