The sub-centre, at Antananarivo, Madagascar 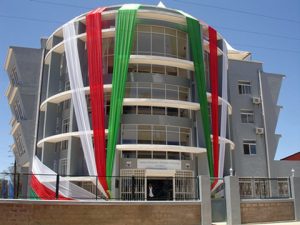 A further key link in the plan to provide effective search and rescue (SAR) coverage off the coast of Africa has been established, with the commissioning of a search and rescue sub-centre that will operate in conjunction with the regional Maritime Rescue Coordination Centre (MRCC) in Cape Town, South Africa.

The sub-centre, at Antananarivo, Madagascar, was commissioned on 11 December 2011 by IMO Secretary-General Adm. Efthimios E. Mitropoulos, together with Madagascar’s Minister for Transports, Benjamina Ramarcel Ramantsoa and Mr. Jérôme Sambalis Director General of the Agence Portuaire, Maritime et Fluviale (APMF).
The inauguration of the new facility, which will operate as a joint maritime and aeronautical centre, marks an important step in a process that began at a conference on Search and Rescue and the Global Maritime Distress and Safety System, convened by IMO in Florence, Italy, in October 2000. African Governments represented at the Conference agreed on a regional approach to the provision of SAR services in western, southern and eastern parts of the continent as well as in island States around Africa. To that effect, they adopted a resolution inviting the African countries bordering the Atlantic and Indian Oceans, as well as the nearby Atlantic and Indian Ocean Island States, to establish five regional centres and 25 sub-centres to cover their entire coastline for SAR coordination purposes.

The establishment of appropriate SAR facilities off the coast of Africa was seen as a key component in the implementation of the Global SAR Plan, the final part of which had been agreed in 1998 at an IMO Conference in Fremantle, Australia. Speaking at the inauguration of the Madagascar MRSC, Secretary-General Adm. Mitropoulos said, “Manning the Antananarivo Centre on a 24‑hour basis, 7 days a week, 365 days a year, will require vigilance, professionalism and a sharp reaction to events – it will not be an easy task!  May those who serve in it live up to our expectations. In thus discharging their responsibilities, they will have the blessings of all those who will owe their lives to the prompt and effective execution of their duties. They and their families will be in their debt forever.”

The commissioning of the Antananarivo facility brings the number of sub-centres now in operation to 15. In March 2011, the fifth and final African MRCC was established in Rabat, Morocco, joining those previously commissioned in Mombasa, Kenya (2006); Cape Town, South Africa (2007); Lagos, Nigeria (2008); and Monrovia, Liberia (2009).
With the completion of the five regional MRCCs, IMO is now using the experience gained in the successful establishment and operation of these centres in Africa as an example for other regions to follow.  The Organization is currently embarking on a similar project for seven countries in Central America, involving the creation of two regional MRCCs, covering areas of the Pacific Ocean and the Caribbean Sea respectively, together with five associated sub-centres.

Cybersecurity will remain a Maritime threat in 2021