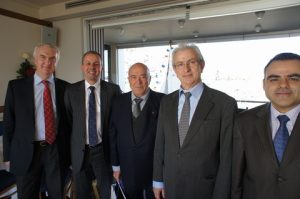 New Chairman and new members as Captain Tsakos retires and Theodore Veniamis is appointed the new Chairman as HAC discusses technical issues, shipbuilding developments and future technologies during the meeting today in Piraeus –

Christian Breinholt, Deputy Director General of the Danish Maritime Authority was a guest speaker at the meeting. He made the case for the Danish proposal for a greenhouse gas convention introducing Market Based Measures for shipping. Looking for support from Greek owners he presented the mechanics and philosophy of the International Green House Gas Fund – a market based measure to address IMO’s ‘equal treatment’ requirements with the UNFCCC’s ‘common but differentiated responsibilities’ approach. It will take years to develop an international convention he said so we need to start now. ‘From our perspective, we need a single, dedicated, mechanism for the global industry’. Mr. Breinholt said that the Danish proposal is becoming widely supported within the industry.

One of Mr. Breinholt’s comments, using Lloyd’s Register research, was that without some form of market based measures, in the context of anticipated growth in trade even with massive energy efficiency improvements, shipping will be unable to reduce its total greenhouse gas emissions. Mr. Breinholt was persuasive and his comments were listened to with great interest by the committee.
Lloyd’s Register provided updates on shipbuilding activity world-wide, insight into efficient ship designs, as well as technical and operational issues. The safety, structural integrity and safe operation of large ore carriers – very important to the Greek market – were discussed and concern expressed again about iron ore loading rates.

Captain Panayiotis Tsakos handed over the Chairmanship, after two terms – eight years – of leadership, of the Hellenic Advisory Committee to the current President of the Union of Greek Shipowners, Theodore Veniamis of Golden Union, at today’s meeting.
Capt. Tsakos said, ‘This is an important forum and I wish Mr. Veniamis all the very best for his chairmanship.’ Mr. Veniamis, on being confirmed as Chairman, said, ‘It’s a great challenge for me to take over from Captain Tsakos, he has been an important figurehead for Greek shipping and I ask that the Captain remains as an Honorary Committee member.”  New members include Nikolaos Tsakos, of TEN and Vassilis Papakalodoukas, of Ciner Shipping, Istanbul. ‘I extend an especially warm welcome to a Turkish company that has entrusted its operation to our Greek compatriot, ’ said the Captain. 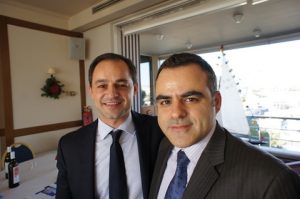 Richard Sadler, CEO, Lloyd’s Register welcomed Mr. Veniamis and sincerely thanked Capt. Tsakos for his support and hard work: ‘No-one has been more devoted to the health of Greek and world shipping than the Captain. He has the sincere gratitude of Lloyd’s Register and the Greek community.’

Tom Boardley concluded, ‘We face many challenges in shipping and this committee is a key forum for us to discuss, debate and benefit from hearing the Greek shipowners’ views on today’s issues. For us as a classification society safety must always be paramount. Of course we discussed the recent debate on the role of classification societies in the design process. I must emphasise – and this was reaffirmed today – that shipowners want us to continue to provide impartial, independent oversight. There is no such thing as high performance, unless it is safe performance and we must always remember this as we help the industry become more efficient.’