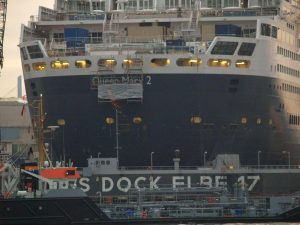 Sparks fly as the “Queen Mary 2” changes her home port to Hamilton, Bermuda, from Southampton under a Cunard reflagging exercise. Hamburg maritime historian Joachim Pein, took this photo* symbolising a historic transformation.  It shows work on the stern of the passengership to change her allegiance, while the ship was at Blohm + Voss dry dock for a 10 day refurbishment.

The refit of what was once described as the grandest ocean liner ever built included improvements to fitness and entertainment facilities, and new carpets and beds for the 1, 310 staterooms and suites.
Sparks have been flying too from the direction of the Nautilus officers’ union, which protested to the UK shipping minister Mike Penning about what it called a lack of coherent maritime policies. Nautilus is alarmed at the prospect of further companies “flagging out” and, as it sees it, undermining the valuable cluster of shipbrokers, marine insurers and other services in the City.

Nautilus said that the exit of the ship, launched in 2004, together with the Queen Victoria and Queen Elizabeth, would have a significant impact in terms of tonnage leaving the UK flag, the symbolism of the ships, the long history of Cunard and the economic contribution to the UK Treasury.
Cunard, owned by Carnival Corp, has said that the reflagging will yield extra revenue now that it is able to conduct weddings at sea, which had not been possible under English law. Analysts say that savings on the wage bill will also have figured in the calculations.

Mr. Pein has contributed greatly to the understanding of post-World War II shipping through the publication earlier in 2011 of an engrossing history of the tanker industry.  His lavishly illustrated volume, entitled Giganten der Meere. Die Grössten Tankschiffe der Welt (Koehler Books, Hamburg) is a highly readable (for those with knowledge of the German language) account of the development of the large crude carrier business, from the emergence of Greek operators such as Aristotle Onassis and Stavros Niarchos, and the American businessman DK Ludwig who pioneered the series ordering of tankers from Japan.  Mr. Pein’s classic book traces the rise and fall of Norwegian owners, how the equivalent of US$400, 000 a day came to be paid for one voyage, the impact of the 1973 oil crisis, the renewed ordering boom from 2004 to 2008, and the fate of memorable behemoths such as the 564, 000 dwt “Seawise Giant”.
*Reproduction of Mr Pein’s photo from www.allaboutshipping.co.uk or any other source is strictly prohibited.