Act now to save life in and above our seas –

Despite having signed up to designate a network of Marine Protected Areas around the British Isles by 2012, to save its marine wildlife, the UK government recently confirmed that the UK will not have a completed network of MPAs until at least 2015. In this Commentary, Kate Sugar calls for more urgent action.
The UK may not boast the gaudy coral reefs and balmy water temperatures of the tropics, but we can (and should) still be justly proud of the rich diversity of our marine life. However, nowadays pressures at sea are mounting with burgeoning ambition for the development and use of our marine environment and resources. So why is it so hard to persuade our Government of the need to act swiftly and decisively to protect what we still have, while we still can?
Anyone lucky enough to dip beneath the surface of our (admittedly chilly) waters can discover another world entirely. Silver fish flash between elegant fronds of kelp that reach up to the sunlit surface. Bright jewel anemones lie carelessly scattered on the rocks like sunken treasure. While above it all, seabirds dip and wheel, one eye always on the underwater realm, where their next meal waits. 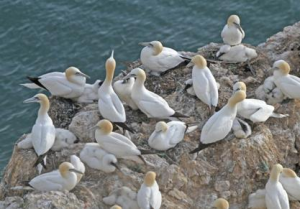 Gannet colony from Bartlet Nab viewpoint, Bemton Cliffs, RSPB reserve, YorkshireFar from the empty, cold, dark and murky scenes that one might imagine, our seas are fantastically important for a whole range of wildlife. Whales, dolphins, basking sharks and more all congregate in our food-rich seas. Our waters are also hugely important for seabirds, with the UK and Ireland together supporting most of the world’s Manx shearwaters (up to 90 per cent of the global breeding population) and 60 per cent of the world’s northern gannets.Wildlife enthusiasts or not, our lives are all touched and enriched in one way and another by that other world, whose borders lap at our shores. An economic analysis of the UK Marine & Coastal Access Act (2009) found that the protection of the marine environment through the provisions of the Act would yield benefits to society worth at least five, and up to 26, times the value of initial investment. Marine ecosystems and the organisms within them provide vital environmental services worth billions of pounds per year, such as waste removal, carbon storage and nutrient recycling. Our marine environment has long supported us in many ways, providing food, resources and livelihoods: for some, artistic inspiration and a wealth of recreational pursuits for others. Now it’s time to return that support, by setting up adequate marine protection.Threatened seasSadly, we are guilty of taking our marine environment very much for granted. Thinking it inexhaustible, we have plundered the depths for centuries, and only recently have we begun to recognise its limits. Realisation is dawning that our seas are a precious resource, and must not be squandered.Climate change is already impacting our seas, with warmer sea temperatures upsetting the delicate balance of chemistry and biology.. For example in the North Sea, the last decade has seen significant changes in the composition of the food supply, with rising water temperatures triggering changes in the plankton species that form the base of the food chain for all marine creatures. This has had dramatic knock-on effects around the North Sea area, with stocks of sand eels (key prey species for many seabirds) severely affected, and subsequent negative effects on seabird breeding success at many colonies, as seabirds like the kittiwake struggle to find enough food for themselves and for their young.On top of these fundamental changes, there is at the same time a general increase in other threats. These include the negative impact of fisheries activities on the marine environment, the laying of cables and pipelines, extraction of oil and gas, and construction of wind farms and other renewable energy technologies.Protected areas In the face of these mounting pressures on our marine environment, it is vital that we help our marine wildlife (including seabirds) by improving protection wherever we can, and trying to build in resilience to marine ecosystems in the face of unwelcome changes. Marine Protected Areas (MPAs) are one essential way in which we can achieve this. Photo credit RSPB

By giving our marine wildlife safe havens at sea, we can help it to survive in the face of worsening conditions. Of course protecting specific areas of sea is not the whole story for marine protection – this will have to be coupled with sensible management of all marine activities wherever they occur, to ensure that effects on marine wildlife are minimized and protection is offered throughout our seas. Both the broad and the site-specific approaches to protection are necessary if we are to safeguard our sealife for future generations, and unfortunately both approaches are somewhat lacking at present in the UK.

For seabirds, while we have a relatively good track record of protecting their breeding locations on land – with the main seabird colonies around our coastline designated as protected sites already – at sea they do not currently benefit from similar levels of protection, with only three fully marine sites designated so far in the UK for seabirds – none of which are for breeding seabirds. Seabirds spend most of their lives at sea and depend on marine resources for food – without safe foraging areas at sea even the most carefully protected breeding colonies on land will suffer, as parents fail to return with food for their chicks, which will then starve. It is therefore vital that we provide protected areas at sea for the protection of our seabird populations.

Government commitment
The UK Government has clearly stated its intention to designate a network of MPAs for UK seas. This network will include different kinds of MPAs:
Areas of European importance for certain species and habitats will be designated as Special Areas of Conservation (SACs) and Special Protection Areas (SPAs) under the European Directives for Habitats and Wild Birds respectively.
Areas of national importance for marine wildlife are to be designated as Marine Conservation Zones (MCZs).
Government has also signed up to international targets to designate an ecologically coherent network of MPAs for the UK by 2012. However, as we approach the end of 2011, the network of sites already designated, or proposed for designation, around the UK is far from complete and does not yet include the full range of sites needed to deliver protection for all marine wildlife, particularly for mobile species such as seabirds, dolphins and basking sharks.
Recent announcements from Government have confirmed that we will not have a completed network of UK MPAs in time for the 2012 deadline. In particular, we are falling behind on the designation of sites for mobile species, including seabirds. From current timescales, the network of MPAs for seabirds will not be fully identified until 2015 at the very earliest, pushing back designation far beyond the 2012 deadline.

The Government must take responsibility for the protection of our seabirds, alongside other marine wildlife. Both the European and the nationally important elements of the UK MPA network must take account of the needs of seabirds, and sites for seabirds must be designated at sea under both regimes if we are to achieve comprehensive protection for our seabirds at sea.
The RSPB is calling for immediate designation of all areas already identified for European protection for our seabirds, and further action to address existing data gaps to allow completion of the network of European sites around the UK for seabirds. In addition, we must capitalise on the current process of Marine Conservation Zone (MCZ) designation in English waters to ensure that the resulting network offers the best protection possible for our seabirds, using the evidence available now to support the designation of sites. Once designated, these sites must be robustly protected.

Three steps
We can delay no longer if we are serious about protecting our marine environment. There are three steps that the Government must take over the next few years if we are to stem the loss of our marine biodiversity:
Designate a full network of both European and nationally important MPAs, covering the needs of all our marine wildlife including seabirds, at the earliest possible opportunity.
Protect sites properly once they have been designated.
Undertake further work to gather the right information to ensure that the best sites are protected for the full range of our marine wildlife, and to monitor the effectiveness of the management of these sites.

These are not trivial tasks, and will require real commitment and careful business-planning from Government to see them through, however set in the context of the centuries-worth of resources and inspiration that our seas have given us, this seems a small price to pay.

We bring this commentary from the latest edition of Ocean Space, thanks to Oceanology International.