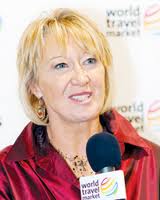 Jeffery’s award of the OBE isfor her services to the travel and tourism industry during her 26 years at WTM, the leading global event for the travel industry.
She joined the marketing departmentof Reed Exhibitions in 1986 and became Group Marketing Manager in 1988, beforebeing promoted to Marketing Director in 1991.
In 1992, Jeffery helped launchArabian Travel Market before becoming WTM Exhibition Director and then assumedthe same role for British Travel Trade Fair in 1996.
In 2000, she was appointed WTMManaging Director before assuming her current role of WTM Chairman in 2008.
Throughout her time in the industry, Jeffery has championed responsible travel, creating an internationalenvironmental initiative in 1996 before launching World Responsible Tourism Dayin 2007.
The 2011 New Year’s Honourslist was chosen based on the UK’s Prime Minister David Cameroon BigSociety initiative, which is focused on people making a real difference tocommunities through volunteering, fundraising, social action and philanthropy.
In 1998, Jeffery launched travelindustry water aid charity Just a Drop which aims to reduce child mortalitycaused by unsafe water. The charity has undertaken more than 92 water aidprojects and helped more than 1.5 million children and their families in 29countries.
“I was genuinely stunned but it’s a great honour andI’ve received lots of wonderful emails and texts over the last week, ”Jeffery said.  “The best thing is being able to share it with somany colleagues both at Reed Exhibitions and within the travel Industry whohave all played their part over the last 26 years in making World Travel Marketwhat it is today and also the many people who have also latterly helped supportand grow Just a Drop.
“Thejoy others have taken for the award has been particularly nice to see and givenme the greatest of pleasure.  My sincere thanks go to colleagues and thosein the industry who have worked with and supported me over the years.”
Fiona is a trusteeof the charity The Travel Foundation and she received the Shine Woman of theYear Award in 2008.