The Markets – the witching hour* 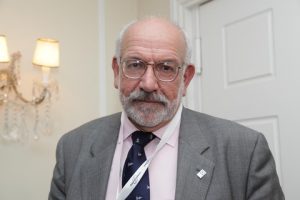 I couldn’t have been more content yesterday at tea-time, without employing any sort of irony whatsoever, when the BDI fell below the 1, 000 mark so as to “alleviate” my lumbago with sciatica and cervicalgia with neuralgia pains, part of my hull …err body problem with excruciating pains, from which I suffer nearly 25 years! Do I need a fifth special survey…? I wonder… But what about all these analysts, bankers and the lot: what do they need? Somebody must end their reign now before they bring the situation to a brink! Who regulates the Regulators? Is there in place a Risk Assessment Proviso? Fancy a live TV debate?

Anyway, I am so pleased, alike when the Fairplay Magazine put me in the front cover on their issue 6506 of the 6th November 2008  in Newswatch, following my speech at Lloyd’s Register’s auditorium on the subject “State of Shipping Markets & World Politics: ‘Faraclas speaks as BDI falls through 1000” on the 23rd of October 2008. Now you might think that I go over the top; no I am not, I just wish to entertain you all, specialists and others involved in any way with our industry, to make sure you don’t get fooled and you don’t fool others – investors, banks, shipowners, students, to name but a few! This is an alarm! This is Mayday! I wish you all obtain a copy and carefully read what was said, how same was opposed and what’s the result today, needless to mention what else is to follow.  I wish you make comparisons and draw comparisons! Moreover, coincidentally, two years after this presentation I had to “defend” my position at the same time at the same place 11th of November 2010 – the day my island of Chios was liberated from the Ottoman yoke!

Most of you have read my reports on the markets (S & P and Chartering) ever since 1980 for three years and then in the mid eighties as a Shipbroker respectively, continuing the shipping saga market Recaps reporting from mid 90’s to post Posidonia 2010 and the nine months over 2008-2009 for otenet.gr shipping markets analysis, as well my interviews to various magazines and my statements and must provocatively invite you to accept that I have never ever failed in my market prognosis.  Contrary to what the mega market predictors, brokers and analysts and bankers where saying, not to mention shipowners themselves, except a handful of few of my staunched supporters, charging millions of dollars worth of specialist analysis and turning the tide and proper competition by reducing the number of companies, shrinking them from the one end and closing them down to the other for the benefit of high leveraged commission and performance.

“Time will tell”, was my response to ironic comments and I mention these examples as the shipbrokers fraternity together with the shipyards and many banks, as well as financial institutions conned the shipping investors, with the exemption of a few cases/examples. The creation from nowhere of shipping listing companies from people who never ever had any connection with the shipping adventure and “work” against to the detriment of the healthy and robust shipping ones., is what we face today. It remains to be seen, starting from the greek background companies that have entered the various stock markets, again with the exemption of very few, what is going to happen?  I have to reply to this question myself: from 59 down to 29 down to 9!

I must confess that in order some to save their skin they might find ways and methods to delay their fall, but that will be inevitable; listings will shrink as not only market capitalisations will continue to decline, but because for the next five to ten years the world markets will overall decline, the shortage of cash availability for the middleman in the street who moves the goods of trade – from food to garments, from luxury products to cars and houses, will evaporate, the trade wars will increase, volatility due to unethical competition will continue with unprecedented force to influence all the markets at sea and offshore– dry, wets, boxships, you name it. Moreover the price of fuel will be the first ingredient to turn the tide slowly slowly towards national fleets – for example who ever expected the over 60 centum nationalisation of major banks post the 2008 world financial fiasco orchestrated by some clever dicks and business hooligans?

Who could ever “imagine” that Lady Thatcher’s privation spree was going to end like this? And what about the tax issue? The polemics of tax issues vis-à-vis  the shipping industry will escalate the war – you dead well know what I mean. Having said so, we have to defend the moral tax evasion of some individuals and companies as the end justifies the means – I would love to see some commentary dialogue/interpretation on this matter. Does Transparency International has specialist personnel to check the shipping scams? How does the Bribery Act of 2010 say applies to international shipping, or is there any International Bribery Act?

Did I hear you say Piracy and Terrorism? These are the other ingredients of formulating the Markets. Well on Piracy I am afraid, and have extensively argued in the past that:  “unless the area from Cape Town up to the Straits of Hormuz and from the south of Red Sea to West Coast India is not characterised/declared as a War Zone, with whatever this entails and with rules of engagement”, piracy will thrive. And who pays the costs, the total costs financial or otherwise? Why should the Shipowners pay these costs and turn the ships to floating prisoners’ camps with barb wire and the lot?

Has ever any safety and security as well as human resources executive/officer or specialist of this kind ever thought of all this mess and address it to the public who receives from the sea almost all the goods needed to live with and survive?  Imagine having in land,   busses or lorries covered with protective barb wire. The Seafarers are not slaves and if they demand say a pay rise for the conditions faced at sea during the period of engagement, then I will tell you what goes on! Remind you that in the past we all knew the problems faced by seafarers when trading in war zones, but there they where fully protected – at least in comparison with today’s issues.

The Market is like Canadian Cod:  it suffers from weight loss despite the warning alarm of FAO! Nobody gives a damn about it.

Some Banks are full of trillion of dollars money, yet they don’t know what to do; the business – shipping or offshore do not borrow as consumers aren’t  buying because they don’t have a nickel left. Don’t tell me about the credit card fiasco of ten trilliondollars! Those who have some bits and pieces try elsewhere- not in the high street, the stimulus of the economy, conversely you get the message for shipping! This is Part one of 52 reports to keep you up for this year, 2012, the Year of the Dragon and the beginning of the economic clashes – wait and see. Marx and before him Nostradamus have spectacularly  failed to make for the wrong reasons the right prognosis; the Capitalist Society is thriving and the world didn’t end up ….or down…sorry, I belong to the pragmatists, hence I predicted precisely ten years ago today, in January 2002 the future of the Euro too, despite my support of the idea of having same and using it to the best to all intents and purposes! 2012 is not just the year of uncertainty, it is the 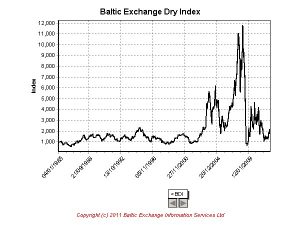 I meant to write this Part One of the Markets Recap/Prognosis at the end of October 2011, hence the Baltic’s Diagramme showing the Market’s BDI ever since the beginning/start in 1985, but my intuition told me otherwise: to wait and see again the fall below the 1, 000 mark. Don’t tell me about the wets! All this is contrary to the needs of the  planet who’s population is Seven Billion!

To open your appetite in these days of the credit crunch continuity and all that jazz, herebelow are the subjects/themes of our coming weekly Market Reports:

* This is an adaption of Shakespeare’s ‘Now is the witching time of night, /when churchyards yawn…’ (Hamlet, III.ii), an illusion to the fact that witches and ghosts are thought most likely to be active and powerfull at midnight. It was an established cliché in the form ‘witchng hour’ by the middle of the nineteenth century. In the 1980s the expression took on a special sense in stock market jargon as a time when accounts had to be settled. ‘It was the witching hour of midnight back home, but the England nightmare had only just begun.’ (Liverpool Daily Post and Echo).

this all is nonsense.