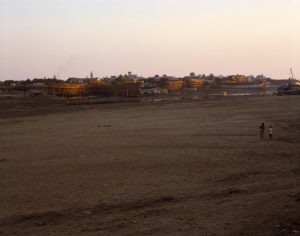 Marked by huge tides of human emigration amid often rich pickings of cargo, the turbulent story of the last two centuries of trade and navigation between India and Africa is the starting point for the latest project of the London photographer, film-maker and installation artist Zarina Bhimji. In a major Whitechapel Gallery exhibition that will run until September 2 2012 devoted to her work, the centrepiece is her 2011 film entitled Yellow Patch. This is a coda to Zarina’s personal history: she was born in Uganda to parents of Indian extraction, who ultimately were driven out, as life became intolerable under the declaration of dictator Idi Amin that the many thousands of residents of Asian origin must get out. The victims were people whose trading acumen had enabled the country to thrive. 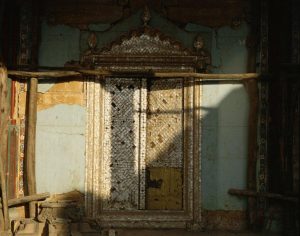 Zarina was just nine when she landed in Britain, her family like many having fled without possessions. Yellow Patch was filmed in four main locations: the old Victorian Port Trust in Mumbai, the desert landscape of the Great Rann of Kutch on the border between India and Pakistan, the Indian Ocean near the port of Mumbai, and various houses and structures in Gujarat. It was from Gujarat that waves of poor emigrants came to east Africa as indentured labour, later joined by small traders, during British colonial rule in the 19th century. Zarina chose the locations for their history pertinent to the Indian Ocean link, for their quality of light, for their architecture, and for the character of the landscape. Images of buildings, sea and landscape are accompanied by a soundtrack that the curator, Achim Borchardt-Hume, says  evokes impressions of dread, loss, passion and tenderness.

Scene from the film Yellow Patch

We see a decrepit Customs boat, other forlorn craft, and more optimistically, the impressive internal structure of a dhow – the type of wooden trading vessel that continues to be constructed today even in the era of the mega, super technology, merchant ship. Gallery panels near the screening area detail some of Zarina’s thorough-going research.

She delved into the maritime activity of northwest India, including the port of Bedi which is 395 nautical miles from Mumbai. Her research turned up the history of Mumbai’s Ballard Pier – up to the 1970s, the largest vessel berthed at the pier had been the luxury liner Rotterdam, of 38, 645 gt. We see a photo of the Port Trust office and Custom House at the pier, as well as of Bombay Cotton Exchange. Her frames of film are empty of human presence, but are redolent of a departed age of noisy commerce: it is clear that each harbour and office premises enjoyed years of intense activity. On another floor of the gallery, Zarina, who was nominated for the Turner Prize in 2007, shows her earlier film Out of Blue which speaks to a Uganda bereft of its bustling Indian community. There are installations, and a series of photos from Uganda, of scenes still to her crying out for a missing and pulsing presence of humankind.