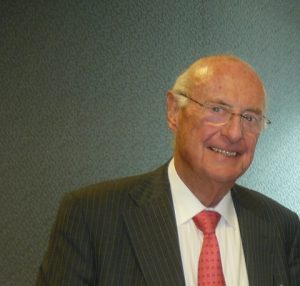 The Chairman of the International Maritime Industries Forum (IMIF)* Jim Davis CBE K(DK)**,   gives his replies to John Faraclas’ questionnaire at the most appropriate time given this complex moment in the progress of shipping – world economic turmoil, piracy, terrorism, collapse of the market indices, charterers inability to honour their obligations, oversupply of tonnage and other problems, drawing as they do on his accumulative wealth of maritime expertise built over a period of more than half a century.

Given the worlds’ possible worst economic crisis, as well as the oversupply of ships, what do think it should be done to alleviate the financial pain with whatever this entails to all involved?

There is absolutely no “quick fix” to the situation nor can improvement be achieved without some major financial suffering.  There will be bankruptcies of shipowners and considerable write – offs /losses by the banks and lending institutions.

Add to the above the backlog of newbuildings yet to be to be delivered over the next two/three years how best one can tackle the mounting  risks involved in the shipping trade?  Given that you where always the advocate of caution with the extreme newbulding orders, most of them very expensive, what really made the “makers and shakers” of this… bubble go for it?

A maxim that I frequently propound is “Never buy what you do not need because it is cheap… it will be dear to you”. Shipowners and of course shipbuilders have tended to ignore this mantra because the former mistakenly believe there is opportunity for a quick profit while the shipbuilders understandably want to remain active rather than face idleness together with its social problems.

What owners could do?

Very little other than to endeavour to cover operating costs with their existing fleet(s).

And what should banks do?

The Banks should maintain calm and try not to foreclose on “non-performing” loans… UNLESS the situation of their owner/borrower looks completely hopeless in the medium/long term.  The alternative of foreclosing is indeed bleak for both parties.

There are many voices within and outside  the industry wanting  to see who’s really accountable for all this mess and they have intimated the need for naming and shaming those who created this situ. What’s your view, what should be done?

“Naming and shaming” has attraction for the Press but achieves nothing really.  The culprits are greedy Shipowners and imprudent banks.  Let us not forget that in a sense we are all, nations and public, guilty of living and for a time believing, in a fantasy world where heady profits could be achieved by borrowing and hoping that world economic growth/activity with concomitant inflation would conveniently expunge the debt… and produce a profit.

To what extend the Euro affects the world economy and in particular shipping? Will more countries go down? what was the fault of the Euro-introducers/initiators?

The Euro was in my view a disaster from the start.  A “One size fits all” currency could not work when applied to so many disparate nations with vastly different economic and fiscal policies. For some e.g. Germany the idea was a Political desire, for others e.g. Greece it seemed a convenient insurance policy while the Nation continued its wayward economic and social ways. The effect of the Euro’s collapse/re-arrangement will be great on the entire global economy.  We are facing some grim years during which the European Nations must start again to look outside the Geographical confines of Europe and resume the pioneering trading outlook of our forefathers (e.g. especially the UK, Holland and Denmark) who achieved prosperity in distant lands.  The “navel gazing” inspired particularly by the unelected Eurocrats in Brussels is disastrous as daily reducing the competitiveness of Europe.

On maritime education and training,   what further can be done given the shortage of “safe” crew!

Encouragement of a working life at sea was unnecessary in my early years.  Such a life was part of a British citizen’s psyche. We need to revive this enthusiasm by Propaganda AND the style of training which enables mariners having served their time actually at sea to move smoothly into a transport life on shore.  Most mariners are already extremely able and adaptable in achieving this.

and finally, there is an increase on piracy, terrorism and maritime fraud: what should be done?

Piracy must be tackled on a global basis. “Freedom of the Oceans” is the artery of World Trade. The trouble until now has been the inability of the United Nations to gain agreement for Piracy to be tackled on a Global basis.  Armed guards, a sort of vigilante approach is understandable short term but does not solve the real problem. Terrorism requires the same energetic United Nations lead action. Maritime Fraud is a technical matter and it is a result of he massive technical advance in communications.

Thank you Mr. Davis. We know look forward our readrship’s comments and organise a debate on each matter referred above.

*IMIF is a unique organisation comprising of high profile representatives from quite literary all parts of the maritime industries. These include shipowners, shipbuilders, ship recyclers, shipmanagers, shipbrokers, insurers, underwriters, P&I Clubs, classification societies, , regulators, maritime layers, shipping accountants, shipping bankers and financiers, surveyors, salvage experts, trade unions and a host of ancillary organisations that share IMIF’s commitment to the promotion and economic well-being of the maritime industries. As a forum IMIF led the way and indeed leads the way in discussing and debating any subject of relevance to the well-being of the maritime industries. For nearly fifteen years members have hosted a series of buffet luncheons for the benefit of the other members to which gust speakers renowned for their expertise have been invited to talk on a variety of subjects.

** Jim Davis has been actively involved in many areas of the International Maritime Industries  for a period that now expands over fifty-five years! His career has included being a Director of P&O Lines, Director of Shipping with Kleinwort Benson Merchant Bankers and various Chairmanships such as DFDS Limited, Midway Shipping and Wigham Richardson shipbrokers. Directorships have included Pearl Cruises of Scandinavia, Rodskog Shipbrokers of Hong-Kong and Global Ocean Carriers, part of the Tsakos Group.