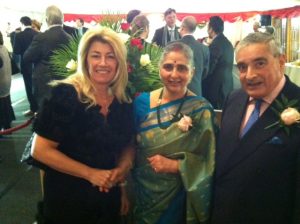 Never ever before there has been such a continues success for an event as in Ravi Mehrotra’s Winter Barbeque. Once again under the white all-weather marquee, but with a different and more ergonomic lay-out, Ravi’s faithful and friends guests made it at South West London to celebrate the New Year as well as the New Chinese Year of the Dragon and exchange views on the world economy and shipping business – offshore too! This is a mini Davos believe it or not and it is the event widely discussed over the years in the City for its simplicity – no speeches, fun, lovely music performed by an harp lady on the dais, great variety of food, drinks and sweets and networking!

Heads of Associations, Bankers, Charity executives, Classification Societies representatives, the Clergy, Diplomats, Exchanges CEO’s, Flag State representatives,  Insurance brokers, Journalists and media representatives (from all over the world), Lawyers, Ministers, heads of Organisations, P and  I Club representatives, Regulators, Seafarers, Shipbrokers, Shipowners and Shipmanagers, Traders, Wista members you name it, where present to honour this down to earth entrepreneur whose wisdom and intuition for business as well as for corporate social responsibility is second to none. 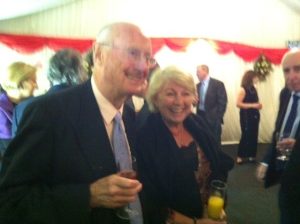 The biggest group where the Indian/sub-Continent –Middle Eastern contingencies! Ravi was included amongst the 100 most influential  people in the Shipping Industry for 2011 in Lloyd’s List! One more accolade in the many he collected over the years for his genius acts and investments!

His trusted lieutenant Philippa and her team have done everything to ensure a very successful evening. Another person who was caring for the guests was the 2009 elected Foresight’s CEO Anil Deshponde, a quite active man! Not to forget Cassandra at the helm with the camera and at the dais for the Wellington Trust’s reminder! There where guests that come for the first time and I’ve heard the best of comments!

I have missed Bernie the previous years and there she was outside at the special purpose… smoker’s paradise, as did Peter Kidman from LISCR in Zurich  and Jaco Martison and his wife Sirena as well as Cecon Asa’s Trine-Lill Kjempekjenn ! 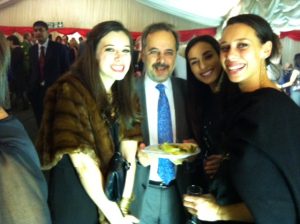 Jim Davis and his wife Hanny just made it having arrived a few hours after their annual winter cruise. There was Admiral Thimios Mitropoulos and his wife Chantal – by coincidence it was the former Secretary-General of the IMO nameday! The Greek Ambassador and Mrs.  Aristeides Sandis, the Panamanian Ambassadress Ana Irene Delgado, Journalist James Brewer with his wife Graciete, Dr. Nickos Mikelis from the IMO with his three daughters!!!, Maria Dixon, hubby Paul and their daughter, shipbroker Wendell Abraham and his wife, Galbraith’s Edward Royle, Jeremy Penn the CEO of the Baltic Exchange and his wife, Philip Wake, Maritime London director Doug Barrow and his wife, Mr. and Mrs. John M. Noble, Eurofin’s Alan McCarthy, The Revd Canon Ken Peters and his wife, Trine-Lill Kjempekjenn and colleagues from Cecon Asa,  Georgina Leonidou from Hill Dickinson, Tiejha Smyth from the North of England P and I, The Hon. Juliet Evans from the United Kingdom Antarctic Heritage Trust! 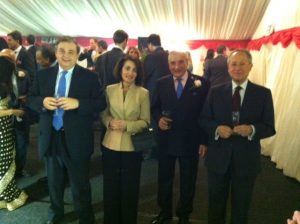 The Greek Ambassador and Mrs. A. Sandis, the host Ravi Mehrotra and Admiral Thimios Mitropoulos

Ah!, talking about trusts, there was an interesting reminder by Stephen Taylor for the support of the Wellington and also a charity auction nicely performed by John Johnson Allen! Dr. Abdoul  Rahim NKK’s head in London was there too, as did Inge Mitchell, Yiota Goussias from Tradewinds in Athens and from Malta and the ever present John Gauci-Maistre from Malta! Excellemus, Bravo Ravi!

Indeed John, and many thanks for this lovely article in honour of the hosts Ravi and Madame Mehrotra and their family and business.

Their support to the shipping community in London is remarkable. The winter bbq is now a tradition in the shipping calendar, we can see people flying to London as well as planning their trips around the BBQ!

It is nice to see that the babies are now growing up! Very soon we will see the grandchildren working along the grandfather!

Many thanks to Foresight and the Mehrotra family for being there and be our friends!