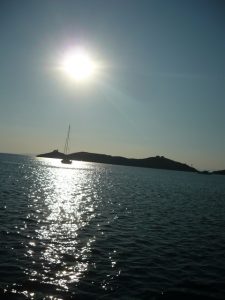 – Organised crime is training its sights on super-yachts all over the world. Wealthy owners need to review their defences against crime, a leading security consultant has warned. By James Brewer.

While merchant shipping is a clear prey to attack across a substantial area off the Horn of Africa and in the Indian Ocean, the danger lurking for wealthy individuals aboard their yachts has become much more widespread. Voyages by private yacht have become almost unthinkable in many areas of the world, according to Blackstone Consultancy, a London-based security firm that specialises in curbing risk in the maritime and other sectors. Yacht owners, corporate clients, and their guests and crew, are more than ever understanding the need to be equipped to respond to a multitude of threats, said Simon Giddins, managing director at Blackstone. Mr Giddins warned that organised criminal organisations operating throughout Europe, the Caribbean, Venezuela, Singapore, the South China Sea and the Strait of Malacca are on the lookout for unguarded and insecure mooring sites that shelter multi-million dollar private assets. Any owners, guests or crew on board at the time of hostile boarding will be swept up in the assault, and specialist crisis management will be needed to secure the freedom of the victims. “Owners of super-yachts often think that security issues are ‘a million miles away, ’ in the pirate-infested waters off the Horn of Africa, but this is clearly not the case, ” said Mr Giddins. “Proactive, preventive measures need to be adopted by owners of these types of vessels in order to negate a spontaneous crisis of kidnap, extortion or theft.” Measures can include a ship security plan, close guidance on routing, and specialist advisers joining the voyage. The same high net worth individuals need to exercise diligence on shore, too.

The shipping business is among those industries sadly  conversant with attacks against leading executives in recent years. Now, said Mr Giddins, “these austere times are making the risk of organised crime, amateur burglaries, kidnapping or tiger kidnapping [the term for an outrage in which an abduction accompanies, say, a robbery or murder] more likely, and our clients have considerable money in fine art, jewellery and cars etc that are highly desirable. The key for Blackstone is to ensure that our client is never viewed as the soft target. “ He told us: “We work with our clients to install and maintain a continuous interlocked process which includes monitoring online assets and alerting the client when a security vulnerability is found; and minimising the risk of an intrusion by keeping software versions up to date and perimeter firewalls configured correctly. “Information security is not a state of mind which is achieved by taking one or two preventive measures, but rather by establishing a core of secure processes at the heart of a client’s business.” His experts are frequently finding attack devices in both residential and commercial properties. As attack devices, covert cameras and listening devices have become readily available (you only have to look online); so too have people with the knowledge and practical experience to use them.

With the demise of regimes in several countries, there is a proliferation of highly skilled operatives who are only too eager to ply their trade for lucrative reward, and a swelling number of even more eager amateurs.  “It is also not unknown for certain governments to assist their own nations’ commerce by indulging in, or tacitly supporting industrial espionage, ” added Mr Giddins. Terrorism may not always be a direct threat to a client but the fact that he or she is attending a high profile event such as a major sporting occasion (for example the Olympics or World Cup) may mean that security is employed to advise and take control  of the person and their family should an emergency occur. All the same, the client accepts and retains some of the risk in order to lead a normal life. If they were to submit to the ultimate security, they would live in a golden cage, said Mr Giddins.  “For Blackstone Consultancy, ” he went on, “the key is to balance quality of life with adequate security that is intelligence-led and flexible.  2012 has already seen contracts signed to upgrade residential security systems, the installation of safe areas/citadels within the home, the ability to view cameras in several properties over one mobile multimedia system such as an iPad or a laptop, and security teams to provide protective surveillance for peace of mind.” In the past decade, the requirement for private security has grown exponentially.

Mr Giddins quotes the author of the book Selling Security, Dr Alison Wakefield of the Institute of Criminal Justice Studies, University of Portsmouth, saying that the “private policing of public space” has become a very profitable business while providing a service with which the police can no longer cope. The message is that if every security guard, close protection operator and CCTV operator were replaced by a policeman, we would consider ourselves to be living in a police state.