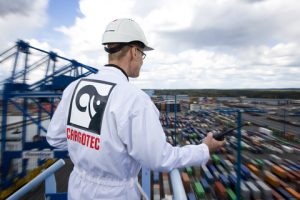 The order is booked during the fourth quarter of 2011. Cargotec signed the contract with STX France, which will undertake the construction of the ships at its Saint-Nazaire shipyard under a subcontract with fellow French yard, DCNS. The 199m multi-role vessels were co-designed by DCNS and STX.   Cargotec’s delivery will include the design, hardware and installation of MacGregor RoRo equipment. The first ship will be delivered in 2014 and the second will be delivered in 2015. MacGregor RoRo equipment for each of the two vessels includes: ·Stern ramp/door ·Side ramp/door ·Shell door ·Hangar door ·Two lifting platforms ·Two bulkhead doors ·Two power packs Cargotec has previously delivered similar MacGregor RoRo access equipment to three Mistral-type vessels. Mistral and Tonnerre, the first two, were built by DCNS and STX France and delivered  in 2006 and 2007 respectively and the third vessel, Dixmude,   delivered in early 2012.