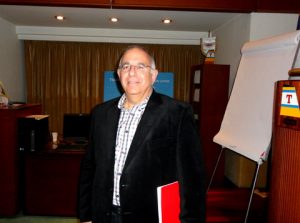 Last Tuesday  afternoon the Chios Marine Club and its President Mr. Marcos J. Tripolitis hosted a conference about MLC 2006 – an overview & outcome of voluntary inspections todate. The speech was given from Mr. Ioannis Couyou from Bureau Veritas. The conference took place at the Tsakos purpose-built Auditorium at the company’s HQ’s in Athens. Elena Kritikou was there and reports:

MLC was adopted by a record vote of 314 in favour and none against, representing 106 member states of the ILO. Its main purpose is to bring the system of protection contained in existing labor standards closer to the workers (about 1.2 million seafarers) concerned and to improve the applicability of the system, so that shipowners and governments do not have to bear an unequal burden in ensuring protection. Mr Couyou, fully equipped with all the appropriate information, analyzed all parts of the convention and underlined the tricky parts that are not easily spotted. MLC 2006 is a compilation of the various labor standards that already exist. It gives seafarers the opportunity to express their complaints directly. Mr Couyou recommended shipowners to read two books that explain MLC in detail: The first explanation is from the Port State Control and the second, from the Administrations. 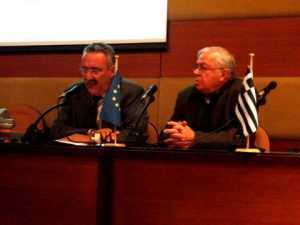 Unfortunately there are some tricky parts, briefly described as follows:

2)Recruitment and placement: manning agents should be certified from MLC

3)Employment agreements: should be more complicated and detailed.

4)Wages: Should be paid monthly and in full.

5)Hours of work/rest: there should be a record.

6)Repatriation: Should be covered from a third party.

7)Owners have to find the flag that the ship was registered as a newbuilding so as to refer to either article 92 or 133(read the convention for more details- www.ilo.org-)

8)There may also occur a problem with the sub contractors working on a ship (ex. Cruise ships) as far as economic issues are concerned. Not all ships can comply with MLC 2006. The ship should be involved in commercial activities and should be above 500GT.

Deficiencies that may occur during implementation :

1)Not trained and informed crew members

5)poor cabin conditions 6)vibrations or noise in the cabins

Companies, shipowners and seafarers and the entire maritime community are waiting for the implementation of MLC2006 (BV estimates same to be effected by4th quarter of 2013).

Note: Our readership should note that The Maritime Labour Convention, 2006 (MLC, 2006) has a new comprehensive website that contains useful tools and resources to support implementation efforts: http://www.ilo.org/mlc . This website provides up to date information on ratifications and recent events in the global efforts by governments, seafarers’ and shipowners’ organizations and other industry actors to help achieve the “30/33” formula by 2011 and bring the MLC, 2006, – the “Seafarers’ bill of rights”, into force.

Also let us remind that Cleopatra Doumbia-Henry, Director of the ILO International Labour Standards Department,   spoke at ILO Online about the recent developments in the ratification and implementation of the Convention, who amongst others, last year, and said: “ At the broader level of international law and with direct impact on the sector, it is very important to note that some important elements of the MLC, 2006 have been adopted almost wholly or in part in the text of the “Manila amendments” adopted in June 2010 by the IMO for the STCW convention. These are expected to enter into force at the beginning of 2012, at which point, at least for these elements, the MLC, 2006 requirements will already apply on ships. Importantly, there is a much greater awareness of the issues covered in the MLC, 2006 which touches on so many matters ranging from the minimum age for seafarers, to social security, to occupational safety and health and to food and catering. It is essential, therefore, that countries respond to the campaign launched by the Director-General of the ILO in December 2010 calling on ILO member States to take the opportunity to move to ratify the MLC, 2006 in June 2011 at the celebration of the 100th Session of International Labour Conference – whose theme is Building a future with Decent Work.

A drinks and dips reception followed and it gave the chance of  good networking. Chios Marine Club was established in 1999 and slowly but steadily progresses to the top with many business and social events. Many of its members, individual and companies are working successfully in the international shipping arena –  in any field one can imagine: from Shipping Lawyers to Naval Architects and Marine Engineers, from Ship-operators to Master Mariners. We will refer to this Club in one of our coming interviews, where we intent to question its president.

Mr Couyou was an excellent speaker and have already applied MLC 2006 to 20 ships as a member of Bureau Veritas. That makes him very experienced on MLC requirements… He estimates that the convention is going to enter into force at the 4th quarter of 2012.

Being one of the attendants at this conference, I have to say that this is a great reporting.
I was wondering if you could provide me some guidance concering the todate level of preparation and the readiness of engaged relevant sectors prior to MLC enterng into force.