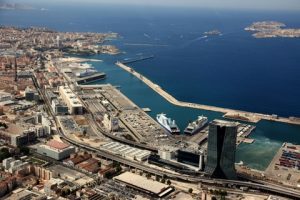 In a year marked by the implementation of French port reforms, cargo through put at Marseilles Fos topped 88 million tonnes in 2011 -a 3% increase on the previous 12 months – while cruise and ferry passenger numbers rose 13% to a record of more than 2.3 million.

The port authority said cargo volumes were‘positive’ in view of the persistent world economic crisis and difficulties in the oil refining sector, noting that Dunkirk was the only other French port to grow traffic.  It added that future activities would bestrengthened by developments such as Fos 2XL, where two new container terminals become fully operational in March, and a potential shiprepair concession to an international consortium focused on the cruise sector.

The authority also stressed that the port reforms are already delivering competitive benefits since transfers of personnel and equipment to various terminal operators were completed in June.  A total of 411 employees transferred – 210 to the Fos oil terminals, 160 to the Fos container, ore and cereals terminals and 41 to the Marseilles container terminal Med Europe (ex-Mourepiane).  Marseilles Fos was the only French port to transfer maintenance specialists, who made up 80 of the total.

Subsequent performance figures from the Union Maritime et Fluviale – representing 300 companies across 22 professions at the port– show the breakdown rate of ship-to-shore gantries has fallen below 5% and productivity at Med Europe has risen from 14 to 23 moves per hour, eliminating truck waiting time.  Meanwhile the doubling of quay length at Fos has slashed ship waiting time close to zero compared with two or three days a year ago.

Cargo growth was underpinned by an 8% increase in oil volumes to more than 59MT.  General cargo, including containers, was stable on just under 16MT and liquid bulks rose 4% to 3.3MT on the back of chemicals, but dry bulks slumped 17% to below 10MT due to weak steel industry demand.

The passenger record was led by Corsica ferry carryings– up 27% to almost a million – and 18% growth in cruise numbers towell over 800, 000.

As expected, annual turnover was reduced in scope by theport reform transfers.  Preliminary estimates indicate a 12% fall to EUR154 million.  Investments totalled EUR 41m.  This included EUR17 mon development support projects – such as quay and road renovation – and EUR 15m on improvements to the port/city interface.

The port’s previous EUR 180m investment in Fos 2XL– which will double container capacity – culminates with the full-scaleopening of both terminals in March, after the authority hands over six gantries to join the two super post-panamax cranes acquired by each operator.  The Seayard Terminal is due to handle its first ship on February 15, while Terminal de Mediterranee – operated by Portsynergy/Eurofos – has been inprogressive operation since the second half of last year.

Among other 2011 landmarks, the port authority launched atender seeking an operator for a new combined transport terminal in Marseilles, which will link with Med Europe container services.  A decision isexpected in April. 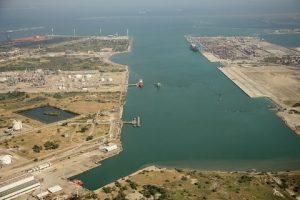 A view from the port of Fos

At Fos, the logistics platform grew by 160, 000m2 with warehouses for Maisons du Monde/Distrimag, Mattel/Geodis and Mediaco, while instructions were placed for a further 100, 000m2 to come on stream in 2013.  In addition, methane terminal projects were confirmed by Elengy and Fos Faster.

Port traffic details: General cargo slipped just 1% to 15.6MT.  Container tonnage was stable on 9.3MT, ro-ro fell a point to 4.3MT – with Corsica volumes compensating for a 9% drop in foreign trade – and conventional traffic was down 7% on 2MT due to the decline in steel industry output.

In unit terms, box volumes dropped 1% to 944, 674 teu –missing the symbolic million mark due to the slow European economy and national strike action over port and pension-age reforms.  Notably, however, a record 67, 000 teu was carried on the inland waterways links with Fos to touch almost 10% of the terminal’s throughput for the first time.

Oil volumes of 59.45MT reflected growth in all categories. Crude imports for domestic refineries crept up 1% to 29MT – an increase pegged by a shutdown at the Reichstett facility in June – while pipeline deliveries to Swiss and German refineries improved 7% to 8.7MT.  Refined products rose 15% to 12.6MT.  LNG soared 25% to 6.9MT, boosted by the new Fos Cavaou terminal, and LPG logged a 23% increase on 2.2MT.

The 4% rise in liquid bulks to 3.3MT was carried by an increase of 300, 000 tonnes in imports of MTBE for use as an additive inlead-free petrol.  Chemicals represented more than 3.2MT of the total, with liquid agro-bulks down 6% on 84, 000 tonnes.

In contrast, the dry bulk sector – dominated by raw materials for the steel industry – fell 17% overall to 9.8MT despite agro-bulks rising 18% to 1.2MT.  Steel-related imports were down 24% on5.7MT, notably due to a partial closure of ArcelorMittal’s Fos site in response to lower demand.  More positively, dry bulk throughput is set to rise by 300, 000 tonnes per year following last November’s opening of the Ciments du Lacydon cement plant in the Marseilles harbour area.

The Marseilles Fos port authority is in negotiation with amajor four-strong consortium over the operating concession for drydock 10 – the Mediterranean’s biggest at 465m long and 85m wide – which wouldbecome a repair centre for new generation cruise ships and other ultra-largevessels.

The authority issued a call for tenders last summer, settinga December deadline for candidates with recent experience of handling shipsmore than 250m long.

Exclusive talks are about to begin with a group consisting of STX France and Mariotti, the world’s second and fourth largest passenger ship builders; Genoa-based San Giorgio del Porto, the leading Mediterranean shiprepairer; and San Giorgio subsidiary Chantier Naval Marseille, which has run the port’s drydocks 8 & 9 for the past 18 months.

The group’s prime market would be the cruise sector and it foresees the possibility of capital investment from cruise shipowners.  If negotiations with the port go to plan, the concession contract would be signed in March and drydock 10 would come into service from late 2014– coinciding with the introduction of cruise vessels more than 330m long that are currently under construction worldwide for Mediterranean service.

Drydock 10 is the only facility in the western Mediterranean that could accommodate ships of this size.  Other markets would include offshore platforms, LNG super-tankers and mega-size container carriers. The drydock entered service in 1975 aimed at giant oil tanker repairs. This market gradually shifted to regions such as Asia and, until 2000, it was used as a back-up resource for drydocks 8 &9.