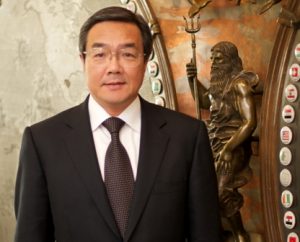 IMO Secretary-General Koji Sekimizu, speaking at the opening of the Sub-Committee on Bulk Liquids and Gases (BLG) today (30 January 2012), stated that IMO is the right international body to deal with safety of passenger ships and, in particular, a safety review after the Costa Concordia accident.

He has included an additional item on “Passenger Ship Safety” on the agenda of the IMO’s Maritime Safety Committee, which meets for its 90th session from 16-25 May this year. This will provide an opportunity for IMO Members in the Maritime Safety Committee to consider any issues arising. He appreciated any initiatives of Member Governments and the industry to improve safety and encouraged them to put forward their contributions to MSC 90.

These moves come against the background of a raft of safety measures already under review at the UN agency, including work going on in several sub-committees to further improve safety measures for ships, including passenger ships.

Given that the safe operation of passenger ships is of major interest to the international community as a whole, Mr Sekimizu has also urged all IMO Member States to ensure that their current national safety regulations and procedures are being implemented fully and effectively, including those aiming at ensuring safe operations on board.

In the spirit of IMO’s continuing proactive approach to passenger ships safety, Mr. Sekimizu opened a channel of communication with passenger ship operators – through the Cruise Lines International Association (CLIA) – immediately following the Costa Concordia accident. CLIA has responded positively to Mr. Sekimizu’s request to hold meetings with him to discuss the safety of passenger ships in general and, in particular, any findings and recommendations from its own, internal, review of current practices and safety procedures in the operation of passenger ships.

Mr. Sekimizu reiterated that he had urged the Italian Administration to carry out its investigation into the casualty and to report its findings to the IMO as soon as possible. Mr Sekimizu expressed his gratitude that the Italian authorities had agreed to his request for the IMO to be represented as an observer on the body overseeing the casualty investigation in order to monitor progress closely and remain abreast of emerging issues, as they arise.  He pledged that the Organization would consider seriously the lessons to be learned and take action as appropriate in the light of those findings.

Who pays the Piracy Bill? –