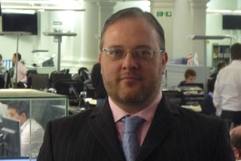 With so much discussion of the poor freight rates available to VLCC owners hiring their ships out for voyages from the Middle East to major consumers east and west, it is informative to see how much the spot market for VLCCs has changed in just a few years.

The US, the world’s largest oil consumer and traditionally the major customer for Middle Eastern oil, has diversified its supplies of energy with important effects for the VLCC market. The reasons for this diversification are complex and reflect not only market evolution, but changes to US economic, fiscal, environmental, and foreign policy.

More locally-produced oil will replace long-haul oil in a shrinking marketplace: the EIA 2012 Early Release Overview forecasts a 0.5% annual reduction in energy consumption per capita in the US between 2010 and 2035.

Meanwhile, high gasoline prices in the US have led to a reduction in domestic gasoline and diesel demand, with the US becoming a net petroleum products exporter for the first time in 2011 since the late 1940s.

Despite overseas demand for petroleum products refined in the US, a number of East Coast refineries have closed, if they rely on imported crude, as these cannot compete with US Gulf refiners with access to cheaper West Texas Intermediate crude oil.

China meanwhile has become the world’s second largest consumer of oil and, with an extensive refinery building programme underway, is in line to match US oil consumption within the current decade.

Consequently, the VLCC spot market has swung eastwards; in 2005, 20% of VLCC spot fixtures discharged in China; in January 2012, that had increased to 40%. Chinese oil refiners have swept into leading positions in the VLCC charter market.  Discharges East of Suez now account for 85% of VLCC voyages out of the AG compared to 71% in 2005.

Mark Williams, Braemar Seascope research director, believes this swing to the East is now firmly entrenched. He said, “As Chinese refiners will probably add over 6m bpd of domestic refinery capacity in the next five years, their presence in the VLCC spot market is likely to increase further as China makes efforts to secure its energy supplies.” 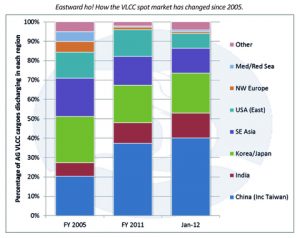 ICS board meets in London

Intermanager starts the year with expansion