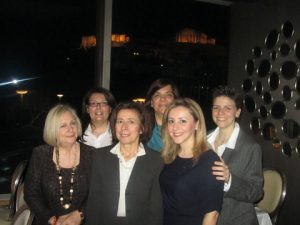 On January 26th, WISTA-Hellas members gathered for an evening of celebration at the Dionysos Restaurant below the night-lit Acropolis for the traditional cutting of the New Year’s Vassilopitta.

On cutting the Pitta, the president of WISTA Hellas, Anna-Maria Monogioudi, announced her wish that 2012 would prove to be a positive and creative year for all.

The lucky punter of the traditional “flouri” (sovereign) went to director of Niites Maritime Corp. and owner of “Gaia” Art Gallery, Drossoula Therapiotou, who was offered, as a prize, a complimentary dinner for two at Dionysos Restaurant

Vera Chalkidi, commercial director of Athenian Sea Carriers was thanked by Ms. Monogioudi, on behalf of all members, for her outstanding contributions during her two-year presidency of WISTA-International as she was presented with gifts from both WISTA-International and WISTA-Hellas.

During the event it was announced that, in response to the overwhelming support from WISTA Hellas members to the humanitarian organisations “Doctors of the World” and “Praksis” to which medicines were donated for their needs, the WISTA-Hellas board of directors motioned consideration of organising similar functions in the future. Supported by WISTA-Hellas, the medicines collection was made in December during an evening co-organised by Prime Management Services, WISTA Hellas and friends of the non-profit cultural organisation “Kardamylia Naftosyni” (Kardamyla Seamanship).  At that event Fotini Xyla-Fafalios gave an extensive presentation of the Kardamyla* Maritime Museum where the proud heritage of Greek shipping will be displayed.

Anna-Maria Monogioudi also announced that the board was considering the possibility of organising a conference in conjunction with the British Hellenic Chamber of Women’s Committee which would offer an opportunity for members of both associations to expand their contacts base and develop closer business synergies. 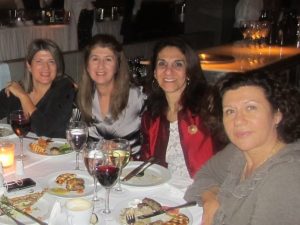 *Kardamyla is a small town North-east on the Island of Chios, Greece the fatherland and motherland of many well known international shipowners over 200 years.