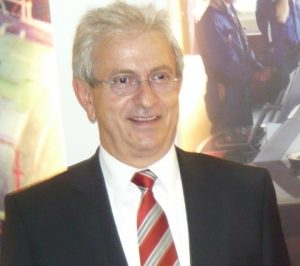 Following the Annual Ordinary General Meeting of the UGS members, which took place last Wednesday the 8th of February at the Eugenides Foundation Mansion, the President Theodore E. Veniamis took the podium and reported on the activities of 2011, as well as  he gave an extensive reference on the industry with respect the maritime developments within  Greece, the European Union and  the World.

The proceedings of the convention continued with the election of officers for the new three year-term administration.

The newly elected Board met on Thursday the 9th of February at the UGS’ premises and after the verification of the election result, constituted as follows:

The above, as in general all Greek Shipowners,  are one of the world’s most powerfull individuals of the highest calibre and business reputation and not only further the sector, but support in many ways the international community with their silent unsolicited charitable work!

Theodore E Veniamis, comes from the sea-town of Vrontados in the Island of Chios, the motherland of many seafarers and successful shipowners for over three centuries! The son of a Master Mariner, Veniamis graduated from the University of Athens’ Commercial Faculty and has been involved in the industry for over 35 years. A successful shipowner with a multitude of other local and international activities and participations in international shipping associations, organisations, and lobbies, he leads Greece’s, Europe’s and the World’s most powerful body/lobby, in the most crucial period of the World’s Economic situation. Above all Veniamis is renowned for his charitable activities, one of which involves primary education as well as maritime!

In his speech Veniamis covered all the current Greek, European and International maritime issues and events, stressing:

Veniamis thanked all the members of UGS, as well as those who stepped down, congratulating  them for their support, effort and contribution.

www.allaboutshipping.co.uk  hopes to bring you verbatim his speech and it is about time that the shipowners of Greece, the Masters of the Seven Seas be heard for the benefit of Greece, Europe and the World; it’s about time, as no other body promotes successfully the country’s interest and capabilities, needless to say the overall safe and responsibly carrying the world’s products as no other shipping nation, to be listened and accepted in saving Greece! We have already hinted in one of our November 2011 reportings, the “ship-shape” being the buzz word to save Greece et al!