Top Posts
Hot Port News from GAC
MarISOT
Don’t take chances where your health is concerned…
Stage is set for final Medal Races at...
Union fury as Scottish Government charter union busting...
US and EU need one another, G7 finds...
Transport Infrastructure Financing course – 20-24 September 2021...
Exceptional Dry Market surge amid enigmatic Geopolitics and...
Landmark Marine film unveiled as the global spotlight...
Thermo King Announces Development of a Bachelor of...
Hot Port News from GAC
Dutch Olympians remain in control at the Hempel...
We’re Half Way There! Will You Join Our...
Home NewsConferences, Seminars, Forums IMIF buffet luncheon London 13 February 2012 – a gathering of the great and the good!!
Conferences, Seminars, ForumsNewsOrganisations

IMIF buffet luncheon London 13 February 2012 – a gathering of the great and the good!! 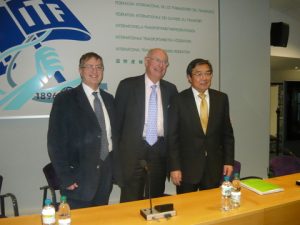 I have attended a considerable number of the IMIF buffet luncheons – they have been taking place for at least twelve years now usually with seven luncheons a year;  John Faraclas reports on IMO Secretary-General’s first industry meeting.

IMIF always manages to attract a high profile speaker for each event and that speaker of course attracts a following of high-profile IMIF members to participate at the luncheons. Interestingly these luncheons are hosted by the individual organisations that make up the membership of IMIF – they are aware that IMIF itself is an organisation that operates on what is probably the smallest budget of any of the international maritime bodies and they seem happy to pick up the tab for these luncheons – attracting as they do some of the most prestigious names in the industry.But never before have I witnessed so very many high profile delegates at one luncheon and on such a scale. One reason might the the identity of the guest speaker, Koji Sekimizu, the newly appointed Secretary of the International Maritime Organisation, the United Nations body that deals with the world’s shipping at a sovereign state level. Another reason might be the host for this luncheon, David Cockroft, General Secretary of the International Transport Workers’ Federation, ITF – the largest affiliated Trade Union in the world and a third reason might be the iconic chairman of IMIF, Jim Davis CBE K(DK), the recipient of a Lifetime Achievement Award last autumn at the prestigious Lloyd’s List Global Awards Dinner. After a splendid luncheon the delegates moved to the roomy ITF Conference theatre.

Among the delegates were Kostas Amarantidis, the new Director of the Greek Shipping Co-Operation Committee; Graham Barnes of BankServe, Angus Frew and Mark Brownrigg of the Chamber of Shipping; Nigel Carden of Thomas Miller; Julie Clegg of Stephenson Harwood; Andrew Craig-Bennett of Cosco UK; Foresight’s Ravi Mehrotra and two of his senior directors; Richard Greiner of Moore Stephens; Peter Hinchliffe – International Chamber of Shipping; Derek Hodgson of IACS; Jeremy Hodgson of Deutsche Schiffsbank; David Jones of Intercargo; John McDonald – European Chairman of ABS; the veteran IMIF member Antony Nunn OBE of the International Union of Marine Insurance (in this year 2012 of the Olympics staged in London, UK one remembers that in his time the 83 year old Tony was himself once a British Olympics athlete); CMA CGM’s Michael Parker; The Baltic Exchange’s Chief Executive Jeremy Penn; Class NK’s Dr Abdul Rahim; Struan Robertson of Clarksons Legal Services (and a Deputy Chairman of IMIF); Richard Schiferli, Secretary General of the Paris MoU on Port State Control making a special journey from the Hague to be at the luncheon; Cecil Smylie of Fairdeal International and a former master of the cruiseship Canberra; Clarkson’s iconic Martin Stopford and many other delegates from the maritime industries and ITF – a number exceeding 50 if I counted correctly. Ah! and the media- Fairplay and Tradewinds with a special photographer sent by Julian Bray, Susanne Hakuba.

Jim Davis introduced Koji Sekimizu. He expressed gratitude that Mr Sekimizu had agreed to speak at an IMIF function for his first outside role. Jim Davis had been in regular contact with Koji’s predecessor, the brilliantly diplomatic Admiral Mitropoulos but Jim Davis recognised that much of the energy and force of international shipping was moving to the east so it was appropriate to have a new Secretary General from the east. Koji confirmed that it was his first entry into the shipping assembly – he had had a hectic start to his new role but considered it good to have a meeting with so many representatives of the industry within his first month.

He had a lot of goals he wanted to achieve, issues to be tackled at a global level.    He wanted a very business-like application of the IMO mandatory audit scheme. He did not claim to be a politician or a diplomat but instead a worthy technician.

At the 3rd Technical IMO sub-committee he wished to promote 3 rules. 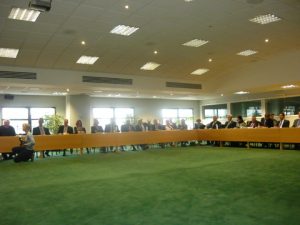 First – Management – and the appointment of new ‘management’ officers.     Second – Representation – of staff, the industry – and himself. He had accepted an invitation to attend at Davos – it was useful for him to emphasise the importance of shipping in the world economy and he wanted to go ‘outside’ the shipping industry to promote it. He felt that 20 years after the Rio Conference he wanted to engage with the developing world and to highlight shipping and its importance in developing the sustenance of the world. He had invited all IMO members and Ambassadors to attend an ‘informal’ meeting to jointly work together.

Third – Leadership – He had met with the Secretary General of the United Nations, Mr Ban Ki-moon and he hade been invited by Mr Moon to carry on promoting IMO’s role against piracy – including a meeting with British Prime Minister David Cameron on anti-piracy on 23rd February and on 16th May IMO was to handle the issue of arms on board ships – he strongly felt that this was for the IMO to handle – not the UN. He wanted to introduce new mechanisms – he was acutely aware of the global financial problems but such things as piracy had to be dealt with and he had set up a sub-group structure to look into handling the financial aspects of it. While this was happening Costa Concordia had occurred – so very shortly before the Titanic Conference. Mr.  Sekimizu was adamant that we should not pre-judge or speculate as to the reasons for the accident until a proper investigation had been carried out – ‘under ITALIAN law’ he emphasised. He acknowledged that more than 70 nationalities were involved so IMO staff will punctiliously monitor the investigations.

As a final initiative there will be a specific agenda on maritime safety but he emphasised again that he did not want to pre-empt any findings. Time is tight, he acknowledged and there are so many other issues as well – greenhouse gas issues, maritime traffic management, sustainable development and the future of IMO. He needed a ‘country’ profile for each of the member states – based on their own national profile.

And finally he emphasised that he was ‘feeling great!’ I live in Dream and Reality. In bed I dream of IMO and when my alarm goes at 5.15 am I get up determined to convert those dreams into reality!! He alluded to one final thought – in 1985 when negotiating with the OECD Koji had suggested promoting the scrapping of ships. Turning to IMIF chairman Jim Davis he said “I believe that Jim Davis was also involved in these promotions!” Jim Davis thanked Mr Sekimizu for a tremendous “tour de raison” but added that the problem of the Court of Human Rights insistence on the release of captured pirates was another issue to be followed up.

Ravi Mehrotra felt that the commercial implications of regulations needed closer study. “You need to think how to develop your own safety culture’, Koji said. From the beginning the IMO has not been involved in commercial aspects. 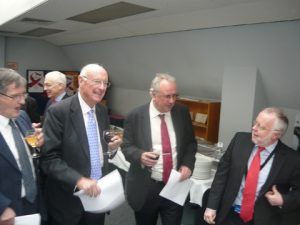 John Whitlow of ITF said ‘You have talked of your commitment to sustainable development – I hope this will address social aspects for seafarers as well.’ Andrew Craig-Bennet of Cosco referred to regulations put in place after a collision 40 years ago. The regulations are still there but shipping has changed beyond recognition – are there any plans for a review? he asked.

Jim Davis emphasised that IMIF totally supported the IMO’s ‘global’ approach to shipping. “There are too many local ‘regional’ areas trying to set themselves up to compete with the IMO in their own restricted local areas. There have to be agreed ‘global’ solutions. He thanked the speaker, hosts and the IMIF delegates. Koji Sekimizu had the last word. “The world is happy to purchase and consume all the multitude of goods from all over the world but noticeably manages to totally ignore all the ships that carry those goods to their many destinations.” 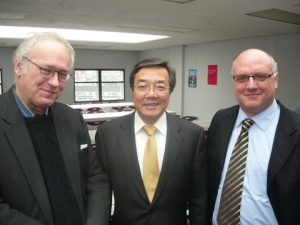 We need more than ever global maritime regulatory system. Both IMO and ILO can only serve this scope.

On the other hand, shipping industry can not be other than the victim of piracy.

The international community, through UN should act accordingly NOW !!!