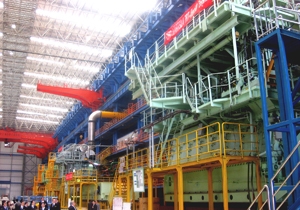 The milestone was reached with the completion of a seven-cylinder Wärtsilä RT-flex82T engine, the second in a series of six, designed for the propulsion of large commercial cargo ships such as tankers, bulk carriers and containerships. For customers, the benefits of the Wärtsilä RT-flex82T engine include high efficiency with low fuel costs. It also features low emissions and flexible engine operational modes.

One million refers to the accumulated power output in brake horsepower (BHP) of the engines produced by QMD since the start of its operations in January 2009.

During its roughly three years of operation, QMD has built over sixty engines, the majority of which are Wärtsilä RT-flex engines, and also some Mitsubishi UE engine types. QMD has quickly gained a reputation as an engine builder that provides high-quality engines and comprehensive support to shipyards and ship owners.

“The fast development and strong growth of QMD shows that much can be achieved when strong shareholders are committed to the success of their joint venture. This has been a great help to move forward in an efficient way, “ says Mr Rien Hoogerbrugge, CEO at QMD.

The factory delivered its first engine in March 2009. It presently employs around 560 persons.

Novel propulsion arrangement by Wärtsilä and RINA can...