Marine mutuals like the UK P&I Club are committed to reducing the number and size of insurance claims they receive. After all, in the P&I world, members own their respective clubs and through pool arrangements within individual clubs, they in effect pay their own claims.

The lower the level of claims, the higher the probability that the cost of insuring through the club will reduce After much study and only after in-depth trials with certain shipowners, the UK P&I Club is now launching an innovative risk management scheme utilising a ‘BowTie’ approach to identifying areas of risk and minimising the occurrence of incidents.

The initial public announcement was made in London in front of members of the UK trade press and now it will be presented publicly for the first time in Asia during the Shipping Hong Kong Week (27 Feb – 2 Mar, 2012). At the Business of Shipping conference on 1 March, the UK Club’s Loss Prevention Director, Karl Lumbers will explain the concept in detail and be available afterwards to answer any questions the audience asks. He explains:

“Working with those members who wish to identify the various threats to the smooth (claim-free) running of their vessels, we conduct reviews on those areas which may cause claims. Thomas Miller P&I Ltd, the manager of the UK Club, has access to an incomparable amount of claims data resulting from extensive analysis of previous incidents over a period of 23 years and it is this that has enabled the Club to identify ‘threats’, ‘consequences’ and ‘controls’, the foundations of developing BowTie reports on individual vessels.”

Further details regarding the Business of Shipping conference can be found on the www.shippinghongkong.com website.

Keeping the tiger in the cage

Mr Lumbers cites ‘the Tiger in the Cage example’ as a way of explaining this risk management concept. Clearly a tiger in a cage is a hazard but it is one that is manageable subject to the cage being maintained properly, the zoo keepers being fully trained and everyone following the set procedures when performing their duties. 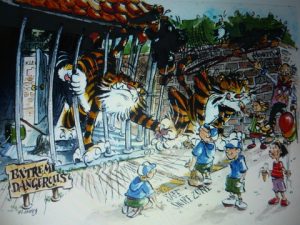 Since the number of risks that can be identified can easily run into three figures, these are distilled down to manageable proportions and then discussed with the owner/manager/ crew to gain their input.

As Karl Lumbers says, only by involving everyone can you expect the final plan to be respected and implemented as intended. Initial experience shows a high level of support for the concept especially from the seafarers who generally appreciate that this system is meant first and foremost to keep them safe.

Mysteries of the markets: some shares at odds with commodities, others contrary with freight rates –