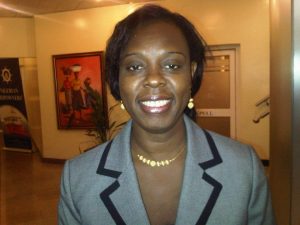 – Understanding the African framework for maritime business: a top Nigerian lawyer explains the essentials in her new book. By James Brewer –

Africa’s fast growing role in global shipping, energy and trading makes it essential for practitioners around the world to immerse themselves in the outlook for, and from, the continent. A new book by one of the most charismatic maritime industry leaders in the sector – a foremost lawyer in Nigeria – offers vital pointers for understanding the African lexicon.

Essays in Admiralty: An Introduction to Legal Issues in Shipping from a West African Perspective has been written by Jean Chiazor Anishere (pictured), who runs her own law practice in Lagos. Ms Chizaor Anishere is remarkable for her personal energy and her dedication to the maritime sector: she has a long list of qualifications and international awards, and is experienced in government and non-governmental maritime organisations, including the Nigerian Chamber of Shipping. She is the current president of WISTA Nigeria, one of the largest of the 30-plus national associations grouped in the Women’s International Shipping & Trading Association. She joined WISTA Nigeria on the day it was established in 1994, typical of her enthusiasm for educational projects, mentoring and networking groups.

She has written her book with Nigerian and other West African readers in mind, and thus presents more of an educational tool rather than an attempt to present some great legal encyclopaedia for high-flying European or American lawyers. This should give a lift in its popularity in Africa; and just as importantly, it should be useful for anyone elsewhere who wants to learn more about what the region, and Nigeria in particular, has to say on the laws of shipping and related industries.

The outside world seems to have a two track approach to Africa. Some powers have been slow to appreciate the potential of Africa or come to terms with former colonial nations, while China – keen to increase security of its raw material and energy sources, and its shipping routes – notably has lavished billions of dollars in bilateral deals of all kinds. This at a time when the International Monetary Fund expects Africa to grow by almost 6% in 2012, about the same rate as Asia. The Economist reported that trade between Africa and the rest of the world has increased by 200% since 2000.

Significantly, in 2010 a group of shipping professionals in the UK with trading interest in Africa founded the Afrimari group (www.afrimari.com) which has attracted many of the younger generation of up-and-coming business men and women.

Ms Chiazor Anishere touches in her book on many essentials including corporate governance, the bunker industry, oil and gas investments in Nigeria, the Rotterdam Rules, maritime liens and cargo claims, multimodal transport, inland container depots and container freight stations, bonded terminals as a means of port decongestion in Nigeria, the Cabotage Act in Nigeria, ship finance, marine insurance and dispute resolution.  She makes a comparative analysis of maritime rules and practice in various African states.

She said: “‘The shipping issues highlighted and discussed in this book are written for the benefit of Nigerians and other West African practitioners, who either work in the industry or have an interest in exploring it, and for non-Nigerians who may wish to trade with Nigerian companies.”

Called to the Nigerian Bar in 1986, Ms Chiazor Anishere has served at the Lagos state ministry of justice, as a solicitor in private practice, and since 1996, has been principal counsel at Jean Chiazor & Co (Ofianyi Chambers) in Lagos.

Louis Nnamdi Mbanefo, president of the Nigerian Maritime Law Association, wrote the foreword to Essays in Admiralty, which he said “is an important addition to the growing body of publications on maritime law and practice in Nigeria. Jean Chiazor Anishere’s book goes beyond academic treatise; it is also a manual which should be kept at the side of everybody connected with the shipping industry.”

Llewellyn Bankes-Hughes, head of the publisher Petrospot, said: “Jean Chiazor Anishere presents often complicated and little-understood concepts in a readable and easily-followed format. Her understanding of international and local legal issues, and how these impact the region, clearly shows through in this book. The reader will benefit from the author’s many years of experience and comprehensive knowledge of the industry to which she has dedicated her life.”

Petrospot is an independent publishing, training and events organisation focused on the maritime, energy and transportation industries. For further information and how to order the book, please see www.petrospot.com/books

The Power of Mentoring

What a brilliant story!
I enjoyed so much reading about Jean Chiazor Anishere’s experience.
Well done John, well done James!