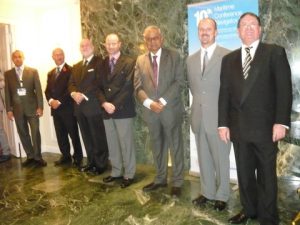 Captain Dimitris Bezantakos, first from the right, on the welcome lie-up together with speakers and sponsors

This International Annual Conference will take place at Divani Apollon Palace & Spa, Vouliagmeni in Athens, just yards from one of the world’s best sea-side places, on Wednesday, 7th November 2012.

After the remarkable success of the 2011 Anniversary Conference,  excellently organised by KEFI Tours & More, and moderated by Nigel Lowry of Lloyd’s List,  NAVIGATOR S.A. is ready to host 400 plus of the most distinguished personalities of the Greek and International Shipping Industry, offering them a unique chance to listen to internationally recognised speakers, exchange ideas with experts and decision-makers of the maritime industry and explore the possibilities of new business opportunities for products and services in this ever changing world, particularly under this international economic recession.

“NAVIGATOR 2012” will again include four different Speech Sessions outlining and concentrating on today’s critical issues of the International Maritime Industry, such as Piracy, Market Trends, Education and Technical Issues. Due to the audience’s increased interest for the 2011 speeches and the positive comments following the US Ambassador’s remarks as well as the presence of the Indian and United Kingdom Ambassadors, our intention is to include an additional Session dedicated to the foreign Ambassadors and Chambers’ Representatives.

The secretariat of NAVIGATOR 2012 will inform all interested parties on the Conference’s Official Announcement and can be contacted at Navigator’s newly-updated site: www.navigatorsa.gra and http://conference.navigatorsa.gr that include photos and interesting information on past NAVIGATOR conferences, speakers and speeches, as well as NAVIGATOR S.A. activities, course and press coverage.

Let us remind you a few highlights of last year’s superb event: 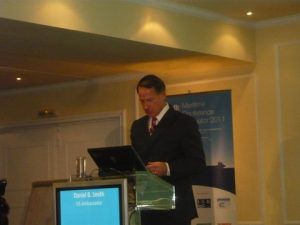 The American Ambassador Daniel B. Smith at the podium

The major issue that should be tackled: Piracy. The US Ambassador Daniel Smith emphasised that Piracy should be characterized as a crime and the route to a solution should be found within the cooperation of the international community. In countering Piracy, the USA has allowed armed guards on board.

Nicki Pappadakis, Chairman of INTERCARGO stressed too that the biggest problem facing today the international shipping community is Piracy! Nearly all representatives of Greek shipping acknowledged this and matter indeed look more than serious, particularly the Piracy acts that take place in the Indian Ocean and off the Somali coast, expanding continuously. Pappadakis revealed that some shipping companies do not comply with IMO’s manual procedures, as well as do not cooperate in sharing views and knowledge of incidents in which they come part of. He urged the international community to increase its participation. 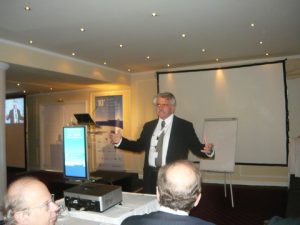 Thenamaris then Managing Director Manoli Vordonis in his usual “academic” style explained that Piracy becomes a lucrative business for the Somalis with millions of dollars in the Pirates coffers! “As human life is underestimated in Somalia, this is a ‘low risk industry’”, he said.

George Tsavliris from the Tsavliris Salvage Group said that the situation goes from worse to worse. He mentioned that a failed attempt to seize a vessel by pirates, lead them to set her on fire later on. He informed the audience that the Governments are not showing the expected assistance and shipowners and crews had to fight alone.

George Gourdomichalis from GBROS Maritime expressed his concern vis-à-vis the expansion of Piracy and the repercussions of attacks on ships, given a recent attack on an LNG vessel. He mentioned that the US will try to check the origins of funds moving around the world towards the pirates. 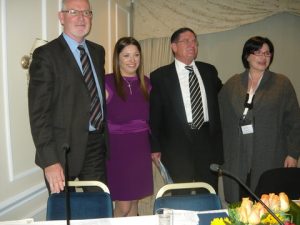 Nigel Lowry, Danae Bezantakou, Captain Dimitris Bezantakos and Konstantina Konsta being applauded by the delegates at the end of the event

Konstantinos Kounadis from the Athens Exchanges gave his optimism that there will be soon companies to be listed there.

Other speakers included Spyros Zolotas from RINA class society, R.K. Karla from the Indian Register of Shipping, Popi  Lyrintzis from QMS with her training expertise, Dr. R Vis from Viswa Laboratories and others.

A couple of days later at the Mythos restaurant-club off the Divani complex on the rocky seaside with spectacular illuminations the 20 anniversary reception party of the company took place; superb!