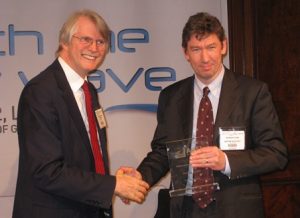 The annual Association of Marine Scientific Industries ( AMSI ) Business Person of the Year Award was today presented to Mr Brendan Hyland, Chairman of WFS Technologies, by Mr Peter French, Chairman of the Society of Maritime Industries, at a special ceremony during the conference “Catch the Next Wave” on Monday 12 March 2012.

Peter French said: “This award is designed to recognise the individual which in the opinion of the adjudicating panel has made a significant contribution to the business of marine science and technology in the UK.

Brendan Hyland leads a company which has been at the forefront of developments in low frequency radio products for communications, navigation and sensing underwater, underground and in challenging environments giving it a world-leading position in the marketplace.

Mr French continued “Brendan’s company epitomises the innovative approach of many UK companies, developing pioneering technology which has led to more than 200 patents being filed in the UK, USA and rest of the world.  This drive to ensure the company retains its competitive advantage is but one reason why Brendan is a worthy recipient of the AMSI Business Person of the Year Award.”

About AMSI and the award