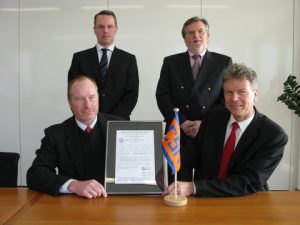 Hamburg, 12 March 2012 – Columbia Shipmanagement’s (CSM) “Cape Mayor” has received a “Maritime Labour Statement of Compliance” from Germanischer Lloyd (GL). The classification society thus confirmed that the working and living conditions of the 20-strong crew on the container ship meet the requirements of the incoming ILO Maritime Labour Convention.  CSM is part of Schoeller Holding and with over 150 vessels is one of the world’s largest ship management companies.

The “Maritime Labour Convention, 2006” (MLC 2006) of the International Labour Organisation (ILO) will govern the working and living conditions on board a ship for more than 1.2 million seafarers worldwide. It defines requirements concerning occupational health and safety, fair employment contract conditions, adequate accommodations as well as access to medical care, health care and social security. The new convention brings together more than 60 existing ILO standards. When the Convention enters into force, as is expected to take place in 2013, all international merchant ships of 500 gross tonnage or more will be obligated to carry a Maritime Labour Certificate and a Declaration of Maritime Labour Compliance on board, documenting its compliance with the national regulations of the vessel’s flag state based on the MLC 2006.

The “Declaration of Maritime Labour Compliance” (DMLC) was checked by Germanischer Lloyd; the inspection was carried out in February on board the container ship in Hamburg. The GL inspectors checked all relevant documents on board, conducted interviews with crew members, and inspected the accommodations, galley, store rooms and medical care facilities of the vessel. 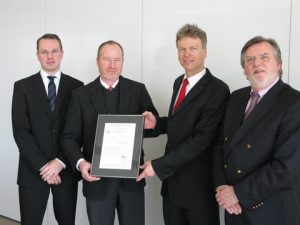 “The inspectors found a ship with good working and living conditions throughout, in full compliance with the requirements of the MLC, “ reported Olaf Quas, GL’s Global Head of Practice ISM/ISPS/MLC 2006. GL therefore issued a “Maritime Labour Statement of Compliance” in the name of the Flag State, the Marshall Islands. The certificate is valid for five years. As soon as the MLC 2006 enters into force, the voluntary “Statement of Compliance” will be converted into the “Maritime Labour Certificate”. The flag state, the Marshall Islands, has already ratified the Maritime Labour Convention and adopted the requirements into its own national legislation. Germanischer Lloyd was authorised by the Marshall Islands to carry out certifications in accordance with the MLC 2006 in March 2010.

Andreas Horber, Quality Assurance Manager at CSM, identified an increased transparency for the crew as a clear advantage of the MLC 2006: “The seafarers are better informed about their contracts and measures for social security.” Following this first MLC 2006 certification of the “Cape Mayor”, Columbia Shipmanagement now plans to have all its other ships certified as well. “For Columbia Shipmanagement the changes were relatively minor, because we have been fulfilling most of the MLC requirements for years. We merely had to adapt a few internal procedures and the documentation to the requirements, because the HR departments, quality management, crewing agencies are involved in the proper implementation of the MLC2006, “ Horber explained.

Around 50, 000 ships will have to be inspected and certified before the MLC 2006 enters into force as is expected to take place in 2013. “Statements of Compliance” are currently being issued by some of the Flag States, who have already ratified the MLC 2006. Once the Convention finally enters into force, ships that hold a Statement of Compliance can obtain the final certificate.

“It is to be expected that the number of voluntary certifications will rise rapidly in the coming months, “ says Olaf Quas. “It is anticipated that all ships will have to comply with the Convention by 2013. It makes sense to take up the requirements of MLC 2006 at this early stage.”

Using a self-assessment tool, Germanischer Lloyd is helping shipowners to identify any necessary changes they must make. In an associated gap analysis on board, areas of compliance and deviation are listed in a report by GL.  In addition, GL is also offering early voluntary certification leading to  a “Statement of Compliance”. This will be converted into a Maritime Labour Certificate once the Convention enters into force.

About the Maritime Labour Convention, 2006

More than 60 existing ILO conventions and recommendations from the past 80 years have been updated and brought together in the new “Maritime Labour Convention, 2006”. It is anticipated that the Convention will enter into force in 2013. It will first have to be ratified twelve months in advance by at least 30 ILO member states with a total tonnage of at least 33% of world tonnage. 24 states have already ratified the “Maritime Labour Convention, 2006”, including Antigua & Barbuda, Bahamas, Liberia, Marshall Islands, Panama, Norway, Spain, Croatia and the Netherlands. Enforcement and monitoring of the MLC 2006 will be undertaken by the flag states of the individual vessels.