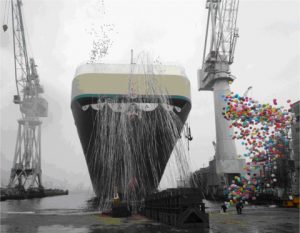 — Aiming at Zero Emissions While Berthed —

The Emerald Ace, designed to generate zero emissions while berthed, was designated as a project to reduce CO2 emissions from ocean-going vessels, and earned MOL a subsidy from Japan’s Ministry of Land, Infrastructure, Transport and Tourism (MLIT) in 2009.

The Emerald Ace, slated for delivery in June 2012, will be the world’s first newly delivered hybrid car carrier and begin test operations of its hybrid power system. The vessel’s hybrid system represents a significant step forward in realizing ISHIN-I, the concept for the next-generation car carrier that MOL announced in September 2009.

The diesel-powered generator will be completely shut down when the ship is in berth, and the batteries will provide all the electricity it needs, resulting in zero emissions at the pier. The “Solar Hybrid” logois painted on the sides of the vessel near the stern to identify its hybrid system and its use of renewable energy.

The development of this vessel was subsidized by the MLIT as a project that develops systems to reduce CO2 emissions from ocean-going vessels, and it is supported as a cooperative development project to reduce green house gases produced by ocean shipping from Nippon Kaiji Kyokai. MOL continually takes aproactive stance in technological development with the aim of reducing the environmental burden of its vessels and operations.