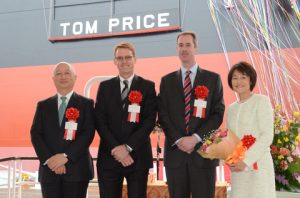 – Will Sail under long-term Contract with Rio Tinto of Australia –

The ship’s name is derived from the Tom Price mine in Western Australia’s Pilbara region, operated by Rio Tinto plc, one of the world’s largest mining companies. Among those on hand for the naming and delivery ceremonies were Rio Tinto Executive General Manager Wayne Aitken, who named the vessel, and Namura Shipbuilding Chairman Tatsuhiko Namura. The Tom Price will transport iron ore, mainly from Australia, under a long-term contract with Rio Tinto. As the world largest operator of Capesize bulk carriers, MOL strives to provide safe, reliable ocean transport services, taking advantage of its advanced safe operation management system and fleet scale to meet continually growing demand for iron ore transport.