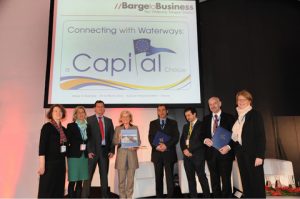 The Italian city of Pisa is the first new city  to join the original five European capitals in an initiative that aims to enhance the role of inland waterway transport and step up dialogue with inland port and waterway authorities. The aim is to   find sustainable solutions to urban freight supply and distribution challenges through greater use of  the waterways flowing through their cities. Pisa has lined up with the cities of Berlin, Brussels, Budapest, Paris and Vienna, who last September signed  up to the ‘Connecting with Waterways: a Capital Choice’ charter.

The charter, an initiative of Minister Brigitte Grouwels of the Brussels-Capital Region in cooperation with the European Federation of Inland Ports (EFIP) and Inland Navigation Europe (INE), aims  to realise the EU ambition of  achieving carbon neutral logistics in major urban centres by 2030. The development comes as many of Europe’s major cities are recognising that they owe their existence to their waterside location, which gave embryonic settlements access inland and to the wider world, making the movement of people and goods easier and cheaper. The signatories are rediscovering the benefits of the waterways that led to their foundation.

Moreover these cities realise that  urbanisation not only implies an increased need for public transport but also presents a growing need for sustainable freight transport solutions. Being at the same time one of Italy’s most important tourist attractions and hosting one of its oldest universities, Pisa is faced with seasonal  variations in population and thus fluctuations in the need for freight supply. This motivates the city and port authorities of Pisa to reflect on ways to enhance the potential of the Navicelli Canal and  the river Arno linking Pisa with the port of Rovigo and the sea.

Pisa formally joined ‘Connecting with Waterways: a Capital Choice’ at a signing ceremony at the ‘Barge to Business 2012’ inland waterways conference in Vienna on 15th March 2012. The ceremony followed a debate on the subject. Signing the Charter for the Italian city was Mr David Gay, Councillor at Viability and Transport of the Municipality of Pisa and,   for the Inland waterway managing company, Mr Marco Magnarosa, Vice-president of Navicelli Spa.