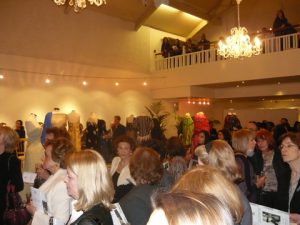 A full house at the Great Hall of the Hellenic centre, exceptionaly eager to see and listen fashion issues

The World might think that Greeks marvel only in shipping and trading with a bit of touristic flavour; that’s not true. Following the world’s unique classic business success in the Maritime world, one has to explore and see the Greek world of fashion too, from antiquity to-date to understand why the Greeks marvel in fashion too.

At the Great Hall of London’s Hellenic centre last Monday the opening of an exhibition to the memory of Koula Lemos – the centre’s Chairman who passed away unexpected last year, took place. The late Koula Lemos  conceived in 2010 the idea of hosting at the Hellenic centre and exhibition presenting important creations from the collection of the Peloponnesian Folklore Foundation by the international Greek designers Jean Desses, Yiannis Evangelides, James Galanos, Dimis Kritsas, George Stavropoulos and Yiannis Tseklenis. Always forward in her thinking, Koula Lemos thought that contemporary Greek Designers should display their creations as well. Following her recommendations the Centre approached Mary Katrantzou, Sophia Kokoalaki and Marios Schwab.

Koula Lemos gave unstinting support to the Hellenic centre from ts conception. Her efforts in the preparatory stages both in organisational matters and in fundraising were singled out by Andreas David at the inauguration of the Centre in 1994. In the seventeen years since she continued tirelessly, giving much of her time and energy to ensuing its success and well being. She served the Hellenic Centre Executive Board as Treasurer, Vice Chairman and Chairman. She was particularly proud and pleased when the Hellenic centre was given the Award by the Academy of Athens in 2011 for it role in promoting Hellenism abroad. She proposed and worked for the organisation of major events and exhibitions and she was working with great enthusiasm for th fashion designers exhibition. Koula Lemos was one of the three children of one of the fathers of modern Greek Shipping; Andreas Lemos whose books on Greek Shipping and Greek shipping Politics are second to one!

Another view from the exhibition

Her only surviving sister Prof. Anna Lemos was present as well as her close family and friends.

Another silent contributor, Stamos J. Fafalios was present and her niece Maria Lemos  who also gave a short speech too.  Major sponsor of the event the  A.G. Leventis Foundation as well as over 35 Companies, Charities and individuals!

I mention above that Greeks marvel in fashion too, as fashion like shipping is in the Greeks DNA! With all due respect, but the world of fashion has “copied” the Greeks. In my archives I found an interesting “proof” of this: an article in The Times a decade ago by Philip Howard under the title: “Ancient potters shaped ideal woman”. Worth bringing you the first paragraph: “The ideal woman of films and magazines, a big breasted provider of creature comforts, could have stepped off an ancient Greek vase.” There are also two pictures, one with the original image on a Greek vase and another with the Hollywood image: Jane Russell in The Outlaw.  I leave the comments to you… but hope you too can obtain the copy and read the real thing! And if you see ancient Greek Tragedies and compare them say with he sixties fashion, then you will see the origins of the fashion revolution from clothes to shoes to accessories!

The exhibition at the Hellenic Centre was a real pilgrimage! The Fafalios’, the Lemos’, the Hadjipateras’ the Pateras’, The Hayialides’, The Leventis’, the Skinitis’, the Carousis’, the Kydoniefs’, Professor Rigas Doaganis and his wife, Karen Schneider, world acclaimed actress Nonika Galinea, Marika Lemos,   and many many others together with the international fashion circuit, young designers and fashion faithful!

We encourage and support fashion in this site and you can log on fashionality.gr link and see more on fashion. We intend to bring you both men’s and ladies fashion for the shipping industry and beyond; with WISTA International being a group we support, watch this space!

Readers are encouraged to log on: www.helleniccentre.org and see the events of the centre too.

Help us to help others

Nice and true said, but, fashion is a non-shipping area. This topic is unrelated with shipping.
G.Polemis