Intermanager President: “Not paying ransoms would be massively detrimental to the industry” – 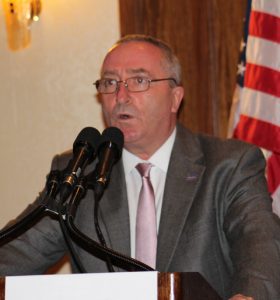 Any move at government level to ban the payment of ransoms to pirates would have a massively detrimental effect on the risk to the world’s seafarers and the global economy, according to Alastair Evitt, Managing Director of Meridian Marine Management, President of InterManager and the newly appointed Chairman of the Save Our Seafarers Campaign.

Addressing the opening session of this year’s Connecticut Maritime Association (CMA) conference in Stamford, USA, Mr Evitt said not only would such a ban have an impact on the willingness of any crew to transit high risk areas, but any owner who then did not pay a ransom for his crew and vessel would be unlikely to ever attract a crew again.

Responding to comments that came out of the recent London conference on Somalia where governments called for a move to not pay ransoms to pirates, he said many vessels would be forced to reroute with the subsequent effect on costs. “And for those forced to transit pirate areas, insurance premiums would become prohibitive – to say nothing of the fact that in many cases vessels would become a total loss after six months, ” he said.

“I for one would not sanction one of Meridian’s vessels transiting the high risk area – if there was no ultimate solution in the event of a vessel and her crew being held captive.”

Addressing conference delegates, he said: “I speak as Chairman of the Save Our Seafarers campaign when I say that we are opposing this apparent change of political will and hope we can rely on your support.”

Referring to the future for the seafarer, Mr Evitt said crew recruitment, retention and development would resurface as a major challenge as the shipping industry recovers from this recession: “What will tomorrow’s crews expect by way of remuneration (to make up for stagnant salaries): social media onboard and security to name but a few. As an industry I believe we will also have to pay more attention to cultural issues and onboard integration.”

Working as part of a team is essential in difficult economic times, and none more so than when it comes to the interaction between ship operators and suppliers. “Shipoperating requires joined-up thinking between everyone involved  and your ship supplier should be seen as a key team player who can make a significant contribution if they are allowed to, “ he said.

So how can ship managers provide better services to their clients? Alastair Evitt said: “InterManager is, investing both time and money in the development of operational and safety key performance indicators and is convinced that with the right measurement tools, facilitating improved management services to our principles will be the next game changer in our sector.”