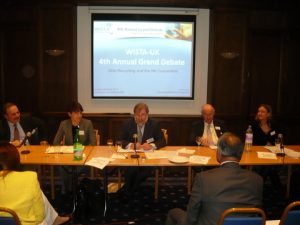 As I have been heavily involved since 1980 with the creation1  of the perfect Scrap yard  – I maintain the word or phrase  Scrap yard as I do not wish to hide behind politically, socially and business correctness and call it “Recycling” or “Demolition” or whatever else they call it, it was the perfect opportunity to attend and support WISTA’s Anniversary for the International Women’s Day, as well as …hustle the “system”, the “establishment” if you like, for losing, since 1980, valuable time and money, arguments and above all loss of human life!

A full house, with an international audience, including high calibre journalists, at  The Mission to Seafarers HQ’s in College Hill at the City of London,  listen and then heavily questioned the speakers and the other members of the panel. The topic was: “ Ship Recycling and Hong Kong Convention”, with the motion being: “This house believes that the Hong Kong Convention offers the only enforceable regulatory regime for hip recycling”. The Moderator: Paul Gunton, Fairplay’s Chief Editor; the main speakers: Dr. Nikos Mikelis, Head of Marine Pollution Prevention and Ship Recycling section at the IMO and Ms Ingvild Jenssen, Director NGO Ship Breaking Platform; the panel included the iconic Jim Davis, CBE K (DK), Chairman of IMIF, the WISTA-UK Ambassador and the charismatic Katy Ware, Permanent Representative of the UK at the IMO.

Dr. Mikelis in his usual simplistic style and humor, backed with good structured evidence maintained that the IMO takes a pragmatic approach and that there are evident improvements over the last eight years that he is visting the Subcontinent and other areas.

Ms Jenssen insisted that the Hong Kong Convention doesn’t cover everything and objected to beaching. As far as the only – the word used for the Convention, well… she has a small point… but not that this points, in my view leads to the solution.

Jim Davis explained that when the scrapping areas become economically stable they abandon this business.

Katy Ware explained that SOLAS and MARPOL where initially an option but proved unsuitable to regulate the industry.

The delegates for their own intents and purposes strongly argued that the changes by the new conventions harm the sellers (shipowners) and “regulators” should create an all purpose materialiasable regime.

These and other arguments will endeavour to bring you in more detail once we have the full transcripts from the organisers – WISTA UK. 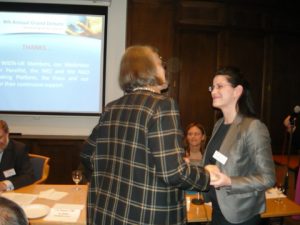 Worth to mention that Philippa Wright, Past President 1998-2008 was honoured with a special citation in recognition for her dedicated work in the shipping industry and beyond; her skills and professionalism have enormously changed the industry, particularly for shipping careers – a real breakthrough! It is about time to read that she is included in this year’s Queens List of Honours.

The question time continued well after the event ended with nice wine, refreshments and dips!

Maria Dixon, the current WISTA-UK President and her team, did their utmost to ensure the success of the event. So, watch this space, when we will bring you the full coverage for a further internet debate. You will also have our side of the story with undisputable facts on beaching, dismantling and politics involved to break the impulse and assist all involved for a pragmatic solution. As said when putting my case forward to the panel, laser cutting equipment coupled with other technical and environmental, as well as more human “accessories”,  will definitely improve the industry and end unnecessary burdens and hustles.

Being a former shipbroker I do know the loopholes, as well as the unnecessary losses and damages which one way or another must end. On the other hand, too much eco-friendly unjustifiable support for the industry, cannot be materialised in the way its “devotees” believe ; we as a site warmly provoke all for a live TV debate!

Thank you John! I would like to thank our speakers, our guests, and specially those that came as far as California, Denmark, Spain, and the Far East.

Our gratitude to The Mission to Seafarers that opened their doors to all of us and made us feel at home, and of course our Events Committee and Liz Watton our Secretary. This has been a joint effort and team work with the sole purpose to see all our friends joining us once more to what is now the traditional Annual Debate!