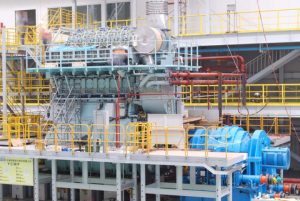 In successfully passing its Factory Acceptance Test in Europe and China, the Wärtsilä X35 engine is now available for market introduction at a time when the marine sector has a clear need for electronically controlled, low speed, high efficiency two-stroke engines.

Wärtsilä launched its new low speed X-generation series in May 2011. Wärtsilä’s new electronically controlled low speed engine, the Wärtsilä X35, has successfully passed its Factory Acceptance Tests (FAT). The tests of the two engines took place in February 2012 at both the 3.MAJ Engines & Cranes company facilities in Croatia, and the Yuchai Marine Power Co., Ltd. (YCMP) factory in China. The FAT procedures were attended by representatives from the Classification Society, the shipyard, and the owner of the vessels into which the engines will be installed.

The 6-cylinder Wärtsilä X35 has undergone a series of tests as part of a comprehensive testing and validation programme. The engine performance of the first two engines fully met all expectations and predictions. All the measured results were in keeping with the calculated values, and well within accepted limits. The measured parameters included stresses, strains, temperatures and vibrations in the engine structure, running gears and combustion chamber components, together with pressures and temperatures in the engine processes, as well as fuel consumption, exhaust gas emissions and smoke. The tests furthermore confirmed the predicted brake specific fuel consumption (BSFC) of 176g/kWh, within the usual 5 per cent margin under IMO Tier II conditions. This was the first 6-cylinder Wärtsilä X35 engine to be produced and tested in Europe. It is the first of four such engines scheduled for manufacturing and testing at 3.MAJ during 2012. 3.MAJ is a long-standing licensee of Wärtsilä, having signed its licence agreement in 1954. The second of the tested engines was produced at YCMP, a Wärtsilä licensee since 2009. Like 3.MAJ, YCMP is a ‘single’ licensee, meaning that they manufacture only Wärtsilä two-stroke engines. “The successful Factory Acceptance Tests are an important step forward in the development of the Wärtsilä two-stroke engine portfolio, as these represent the first engines of the new X-engines family. The Wärtsilä X35 engine is now available for market introduction at a time when the marine sector has a clear need for electronically controlled, low speed, high efficiency two-stroke engines, “ says Mr Martin Wernli, President, Wärtsilä Switzerland and Vice President, Product Centre 2-stroke.

The Wärtsilä X35 is a completely new Wärtsilä engine that, together with the Wärtsilä X40, will cover the small-bore end of the market. The engines will be used for smaller bulk carriers, product tankers and container feeder vessels. It is a segment where Wärtsilä has not been present for a number of years.

The new low speed X-generation series was launched in May 2011. It employs Wärtsilä’s well-proven common-rail RT-flex technology, and incorporates additional features designed to meet the needs of the fast-changing shipping business. Wärtsilä X-series engines feature an extra long stroke that achieves excellent fuel economy, while the operational flexibility enabled by the technology is exceptional. Originally introduced as the Wärtsilä RT-flex35 and RT-flex40 engines, it was decided to change the names in order to align the Wärtsilä product portfolio in a consistent way.