Class in never out of style! 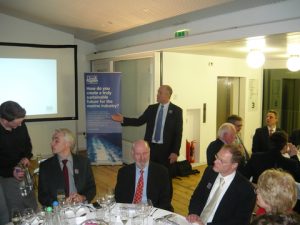 The historic Whitechapel Gallery at Aldgate East in London was the venue for Lloyd’s Register’s Press Evening’s reception to mark the publication of the latest edition of Shipping and the Environment last Wednesday; John Faraclas reports:

Starting with a tour at the first floor to view the Government’s Art Collection, selected by Downing Street’s staff  – the 12 from No10, the fourth display of the Governments art Collection, was superb! Combined with excellent wine the effect was shattering!   Some of the exhibits though need hours and hours of studying, even weeks. Margaret Carpenter’s oil on canvas of Ada Lovelace, the mathematician daughter of Lord Byron, attracted the majority of the participants, as did Samuel Scotts Horse Guards Parade, another oil on Canvas and the modern ones Jason 2000 and Wajid 2000 by Seamus Nicolson – not that the other exhibits were “undervalued”, but these where those attracting the eyes of the thirty-strong group of Lloyd’s Register’s press guests. Shipping, technology and the environment was the triptych of the four presentations which followed at the top floor of the Gallery. 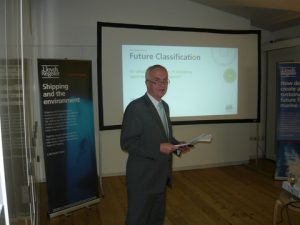 The speakers where introduced by Nicholas Brown, Lloyd’s Register’s Marine Communications Manager with Tom Boardley the first to take the floor.

Boardley, the Society’s Marine Director, after the welcome greetings explained with great clarity within 14 minutes What’s the future of shipping and conversely, that of marine classification. 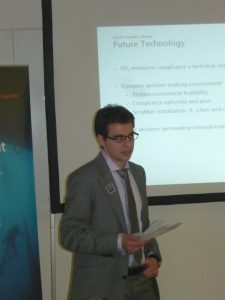 Then come Dimitris Argyros, a senior environmental specialist who gave us a brief account on “Supporting effective decision making  – introducing the Lloyd’s register ECA calculator”, a brief but to the point briefing. Argyros, whose article on “EEDI: why speed reduction is not the only answer” in this year’s hipping and the environment edition, complemented his presentation, was asked many questions from the guest-journalists at his table.

Third come the eloquent Anthony Brandon, A senior surveyor, with the “Five minutes for a bright idea – HVAC: Leveraging LNG fuel systems to reduce energy use and lower greenhouse gas emissions in passenger ships” should be repeated – a very well construed briefing! 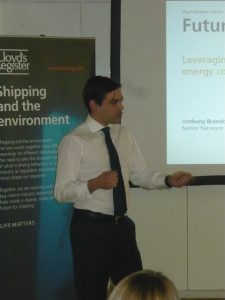 Last on the floor was Hector Sewell, the Marine sale and Marketing Manager who discussed The value of Class in a more complex world” – what an account; excellent!

Following some interesting questions, I have the feeling that we are going shortly to witness fundamental changes in the total construction of ships with the environmental aspect to the forefront; how are the Markets going to react, particularly when the industry is in dire straits, but equally environmental issues are pressing, is the point which will develop to a major problem, given the downward trend of the indices. The need and necessity are there, the effect is what we all expect to see and its collateral damage, unless we see a booming market freight-wise! 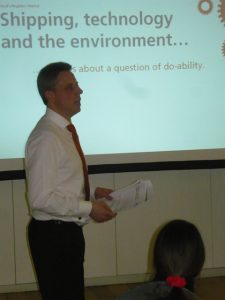 All in all an excellent event and worth noticing the style and communcations techniques observed by all; Lloyd’s Register’s team and speakers where evenly spread to the three tables and were rolling around, thus collecting important reactions leading to the improvement of the entire matters dicussed and furthering the industry! Networking at its best; watch this space!