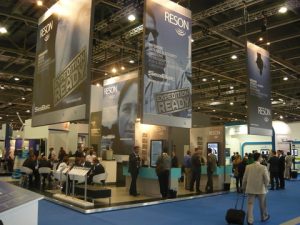 The most successful Oceanology International ever closed just over ten days ago. It was attended by 7728 (a 10% increase on 2010) from more than 70 countries; alongside it, Interspill London 2012 had a total attendance figure of 1346 meaning that the two shows attracted a grand total of 9074 attendees;  John Faraclas reports.-

The Exhibition and Conference at London’s ExCel Centre, saw a host of launches – many featured pre-show on the Oceanology International website. Positive feedback followed the unveiling of new products and services: 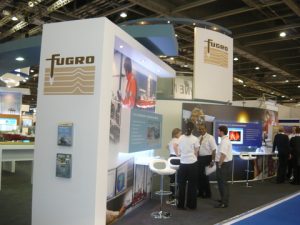 The ever impressive and ergonomic Fugro stand 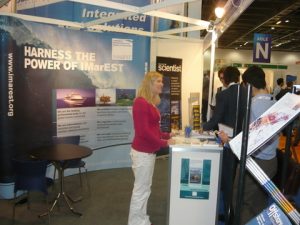 Due to the growing use of Maritime Technology and Ocean Science in sectors such as Maritime Renewables, Maritime Security and the Environment and given what the world goes through with Energy issues, Piracy and Terrorism, these matters where very well covered and attended.

It wasn’t only the exhibition hall that was packed, the conference sessions were well attended, as was the Careers Day; and 380 visited the “FS Borda”, with 789 people visiting the smaller vessels and seeing waterborne demonstrations of their onboard equipment. Given the good weather, particularly on the last day, the number visitors on the pier and …lagoon to see the demonstrations and visit the boats was double than last time round.

The three days had a  rather intense but a must-to-present, in my view,   Conference Programme divided in three main categories – one per day: Marine Renewables, Navigation and Positioning and UUVS. Metocean Requirements for Near-Shore Wave Farms, AIS for advanced maritime operations and Acoustic inspection of pipelines where amongst the nearly three dozen presentations, possible the best!  Viewers can log on Oceanology’s website next week and see some of the presentations. The newly launched conference “Catch the Next Wave”, which took place on 12 March, on the eve of Oceanology International 2012, was attended by over 160 delegates and featured inspirational presentations on disruptive technologies and where they are emerging in the marine sector. 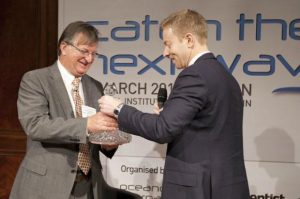 Congratulations to Graham Hawkes, who following his stimulating opening address at Catch the Next Wave, received the Oceanology International Lifetime Achievement Award;

Garry Mardell, who was presented with the SUT’s Alan Greig Memorial Prize, and Brendan Hyland, Chairman of WFS Technologies who won the AMSI Business Person of the Year Award. 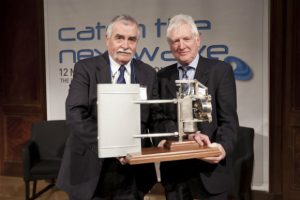 Lastly, the Press office  – commanded by Judith Pattern, was as always a nest for the Press with valuable information and the Organisers’ Reed Exhibitions Mariangela Giuliani did her utmost best to assist guests and delegates. The next even is scheduled to take place on 11-13 March 2014, so ink your diary in advance!

Class in never out of style!