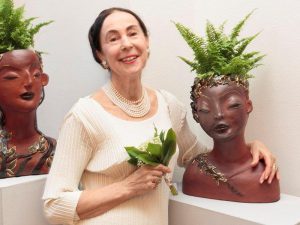 Much-travelled artist Elżbieta Marylska-Łuszczewska Stanhope has imported the spirit of the sea into some of her most treasured work.

Mrs Stanhope is a London potter and ceramicist of Polish origin and her creations have been admired most recently in the 30th annual group exhibition of The Friends of Holland Park Art Society, at the London gardens’ magnificent Orangery (March 24 to April 1).

Her visits to Croatia have been the impulse for a series of 15 earthenware pieces under the title Sea Pictures. It is a description that recalls a song cycle by Sir Edward Elgar, his Opus 37, settings of five poems for contralto or mezzo soprano and orchestra. She told us though that the real source of her inspiration was the sea, as seen from the pearl of the Adriatic, Dubrovnik: “a place I love, and where I shall have a show in September.” A first encounter with Dubrovnik was a coup de foudre, says Mrs Stanhope, an accomplished linguist whose fondness for the French tongue becomes rapidly apparent to all who meet her. “The crystal-clear waters of the sea with its unique emerald colour” lent particular delight to her stay in the historic port. 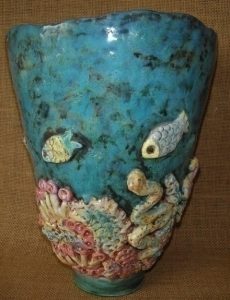 Sea Picture (earthenware, one of a series of 15)

A highly regarded member of London’s Polish community, Mrs Stanhope was born in Pęcice, a village of Masovia 13 km southwest of Warsaw. Her birthplace was just a short distance from Żelazowa Wola, whence came the composer Frédéric Chopin and the violinist Henryk Szeryng. The fact that both her parents were talented painters who studied in Warsaw, Munich and Paris elevated the artistic milieu in which she was raised to even greater heights.

After moving to England, she freelanced for the Polish section of the BBC at Bush House, and for 30 years, she has fashioned striking ceramics in response to diverse traditions ranging from Italian majolica and Renaissance terracotta busts to paintings from China, Korea and Japan.

To this day, Elżbieta Stanhope remains entranced by the feel of clay under her fingers, a medium which bestows her with the ability to create “free from rules, with full rein to the imagination, ” especially the glorious arboreal scenes that have become so entwined in her style. “I am a country girl, inspired by nature, ” she says, repudiating the dictum of Voltaire who posited that “the secret of the arts is to correct nature.” Elżbieta’s riposte: “You cannot correct something which is perfect.”

As she says, an artist is truly a citizen of the world. The UK capital is fortunate that it can call itself home to this Polish patriot. 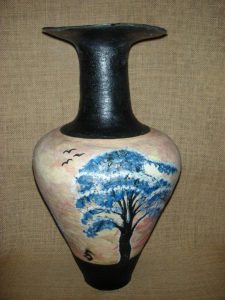 This highly affordable and easy to manage solution is far superior to the unfortunate alternative of relying on creating your own resources,
in order to accomplish these tasks. Chatting is free as well as video calling, social networking sites are entertaining
to use, sending emails can be done as easy and one two and three.

The company has established strong and long-term connections with many of the reputed international
companies. Some individuals are so busy that they don’t get enough time to
manage all the removals by themselves; they definitely look
for help from a reliable company. If you can drive you have the option of bringing your car over or buying a car whilst you are in Spain;
however there is nothing stopping you from getting rid of the use of a vehicle altogether and just relying on public transport,
which is very effective in Barcelona, Madrid and
Valencia.