London has been celebrating the extraordinary achievements of a large group of contemporary artists with Italian background. Their inventiveness ranges over the international scene – and over political and social commentary, from the hypocrisies surrounding the 2008 financial crash, to dazzling portraits of Madonna, Sienna Miller and Michael Jackson, to evocations of the urban landscape of India.

Under the title of Transformation, the work of 16 artists was featured at an evening reception at the Italian Embassy hosted by the ambassador, Alain Giorgio Maria Economides, sponsored by sports car specialist Maserati, and attended by guests from the fields of fine art, diplomacy, international trade, economy and finance.

Curator and exhibitor Carola Syz, who spares no effort to promote innovative art of the Italian firmament, explained that the theme linked a series of young and vibrant artists, who developed between Italy and the UK, and who were exploring and expressing their creativity during a period of transformation. “Through addressing changes in society and using personal experiences, these artists have developed a new form of expression, ” she said.

“Emigration from countries at war, the shift of economic growth from the West to the East, life-changing experiences are all forms of inspiration which have motivated these artists to create new works.” Sculpting, painting and photography were all in the frame.

A sensuous and erotic undertone emanated from the work of sculptor Mauro Perucchetti , who was born in Milan and lives in London. His pop art style has dealt with war, cloning, fashion, drugs and the media, and he has come to the notice of the vast strolling public at Marble Arch who stop to stare at his pigmented resin Jelly Baby family. At the exhibition evening, we were stopped in our tracks by inter alia a fibreglass bisexual Michelangelo 2020: A Tribute to Women and some plump ”jelly baby” figures entitled The Three Politicians. It made a refreshing change from the image of politicians as fat cats.

Some politically adroit pieces from Charlie Masson – born in New York to an Italian mother and French father – are painted in acrylic on an unusual medium, bubble wrap paper.  By the way, when challenged to find a translation into Italian of ‘bubble wrap, ’ the bilingual crowd had to stop and think. Some dictionaries have it as simply ‘bubble wrap’ and others have ‘pellicola a bolle.’ There was less hesitation as to the dramatic impact of Charlie Masson’s work. He studied painting and drawing at the School of the Art Institute of Chicago before moving to Europe in 2009, and is now studying printmaking at Camberwell College of Arts and tutoring young artists with the Prince’s Drawing Clubs.

You might think that pretty well everything has been done by way of celebrity portraiture, but Lorenzo Agius, born in Colchester to a Maltese father and an Italian mother, is undismayed. He has established himself as a leading portrait photographer and has work in the permanent collection at the National Portrait Gallery, Trafalgar Square. Madonna with a monocle is one of his portrait triumphs. Sienna Miller appears to sport a Salvador Dali-style moustache thanks to a rogue strand of hair, and Keira Knightley jauntily poses with a half-eaten potato chip from her newspaper-wrapped purchase outside a neon-lit chip joint.

Ms Syz, born in Rome and based in London, has produced  notable photographic series which illustrate her fascination with aspects of Indian and Chinese culture. Evocative examples on display were scenes of Mumbai roofscapes, and of the harmoniously elegant wall of a Delhi residence put to practical use as a prop for hanging the day’s laundry and some possibly illegal electric wiring. 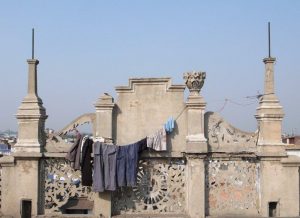 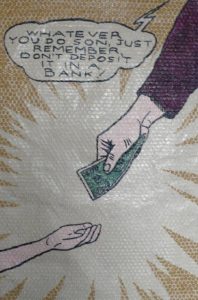