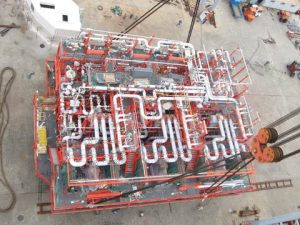 Working together with Sinopacific Offshore and Engineering (SOE) Wärtsilä Hamworthy will design and supply the system concept whilst the key equipment and fabrication will be supplied by SOE. This partnership agreement follows on from the contract to supply a propane-seawater regasification system for the first two 170, 000m3 capacity vessels signed in November last year.

The floating regasification market is experiencing significant uptake and Höegh have projected annual growth in the LNG market of 6-7% over the coming few years. Sveinung Støhle, Höegh LNG’s President and Chief Executive, was quoted as saying: “Our strategy to expand in the floating regasification market worldwide remains firm and we believe in strong continued growth in this segment.”

Reidar Strande, LNG Business Unit Director, Hamworthy Oil and Gas Systems said: “This contract for Höegh LNG follows on from the joint project with SOE in supplying our regasification module for the converted Golar Khannur. The module concept was a fast-track project allowing the regasification system to be almost complete before lifting onboard the vessel, with very few interfaces. Delivery of this equipment took place in November 2011.”

Hamworthy Oil & Gas Systems are a leading supplier of gas carrier cargo handling technology, as well as manufacturer of key cargo handling equipment. Extensive experience with cargo systems for LPG, ethylene and LNG handling is the basis of supplying new solutions in an ever expanding technically driven environment.

Wärtsilä is a global leader in complete lifecycle power solutions for the marine and energy markets. By emphasising technological innovation and total efficiency, Wärtsilä maximises the environmental and economic performance of the vessels and power plants of its customers. In 2011, Wärtsilä’s net sales totalled EUR 4.2 billion with approximately 18, 000 employees. The company has operations in nearly 170 locations in 70 countries around the world. Wärtsilä is listed on the NASDAQ OMX Helsinki, Finland.www.wartsila.com.  Wärtsilä’s acquisition of Hamworthy plc became effective on January 31, 2012.