Body language: how to send the right signals internatio​nally 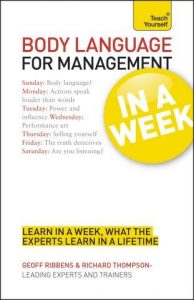 Body Language for Management, due out in May from publisher Hodder Education

Body language: how to send the right signals internationally – whether at the negotiating table, or at sea. Careless body ‘talk’ can kill a deal. By James Brewer

You might think you are on the way to clinching a great deal if your counterparty seems to nod his or her head approvingly. Whoa! A movement of the head that signals ‘yes’ in many English-speaking countries means ‘no’ in parts of Greece, in Bulgaria, Turkey, Iran and Bengal.

Another time, you might leap to agree with a client by giving a ‘thumbs up’ gesture. Another blunder. While in much of the world, that means OK or ‘everything’s fine, ’ it just might not be. In Australia, if made with a jerk, the sign means ‘up yours.’ In Nigeria, parts of Italy and Greece too it may well be interpreted as an insult.

So forget ambiguous gestures, but if you think you can hide behind words, think again. The authors of a new business guide warn that it is quite likely that your posture and gestures will give you away.

All this has a particular importance in businesses involving international trade and shipping. These are ‘people’ businesses that rely on developing relationships of trust to seal contracts. At sea, the multi-national nature of the complements of many ocean-going ships can make for a communications mish-mash leading to physical disasters: misunderstandings between ships’ masters and crew, and between officers and those providing services from shore, have led to loss of life and pollution catastrophes.

“We take body language for granted because most of the time we are not conscious of it. Yet we use it to convey all kinds of messages and meanings – to emphasise, inform, suggest and even manipulate, ” write Geoff Ribbens and Richard Thompson, in Body Language For Management  In A Week, due out in May 2012 as part of a series of short guides for managers and ambitious employees.  The 128-page books, with a large number of experts expounding much common-sense learning, each in a format of a seven-day fast route to success, are being published by Hodder Education (www.hoddereducation.co.uk ) between March and September with the famous Teach Yourself imprint. They promise to be a snip at £6.99 each.

Professionals need to master so many skills in order to stay resilient and confident, and the practical and sometimes humorous style of the books is a refreshing change from many management manuals.

The message from Mr Ribbens and Mr Thompson is that understanding body language helps a manager to communicate more effectively and to defuse conflict by looking beyond what people say to what they really mean. Being a success in management is not about winning or losing, it is about how you interact with others and gain their respect.

It is said that less than 10% of the meaning of what we communicate face to face is in the form of words. This is according to research that has indicated that tone of voice accounts for nearly 40% of our meaning, and posture and gesture 50%.

This is just as relevant to the sales side of a business. A successful sales pitch depends on appearing calm, giving the customer space, using open, friendly gestures, and maintaining a low profile.

Eye contact is a fundamental part of getting on with people and gaining their trust. The confident manager with a small amount of knowledge can often outperform the shy but well informed manager who fails the eye test.

And, sit up and listen please, to some tips on posture. Leaning forward in your chair suggests that you are reacting positively to what you are hearing. Leaning back tends to indicate indifference or lack of interest.

Gender comes into it, too. During meetings, male body language in the company of women may change. One study found that, when a woman was present in a group of people standing, men who were attracted to her pointed their feet in her direction – even while they were talking to male colleagues.

The authors advise, as a rule of thumb (!), to avoid over-casual body language, especially when dealing with valued clients or subordinates, for it diminishes status.

Another book in the series, Successful Change Management In a Week, offers advice on how to stay in a market buffeted by factors ranging from business growth to market decline, tax reform, exchange rate fluctuations and other upsets. Mike Bourne, professor of business performance at Cranfield, and Pippa Bourne, regional director for the Institute of Chartered Accountants in England and Wales, take the reader through “the change roller coaster” and significantly add a post-script entitled Surviving in Tough Times.  They introduce a 10-point approach to the latter by warning: “Keeping afloat will require a more pro-active and realistic approach.”

Cartoon from Strategy in a Week, due out in June from publisher Hodder Education