The Port of Fos Container Terminal

Turkey’s Arkas Line has extended its Aegean-Spain(ASA) container service with a weekly call at Fos, offering French clients a direct link for Greece, Turkey and the Black Sea instead of requiring them to ship via Barcelona.

The service also connects with a transhipment network from Istanbul covering ten ports in the Black Sea and eastern Mediterranean.  The Marseilles Fos port authority predicted this would be a key factor in increasing its share of French export traffic to the region. 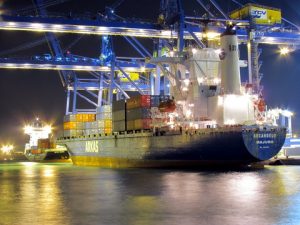 The first call at Fos was made on April 7 by L’Arcangelo, one of three 1, 400 teu vessels assigned to the schedule by Arkas, which is represented in Marseilles by SMI.  Slots on the service have been secured by Seago Line and Turkon, which launched a joint weekly box service between Fosand Turkey in February.

Containership owners and lines must focus on a...

Hapag-Lloyd continues to grow in West Africa and...

VesselsValue partners with Concirrus to provide clients with...

Shipping number of the week: China to USWC...